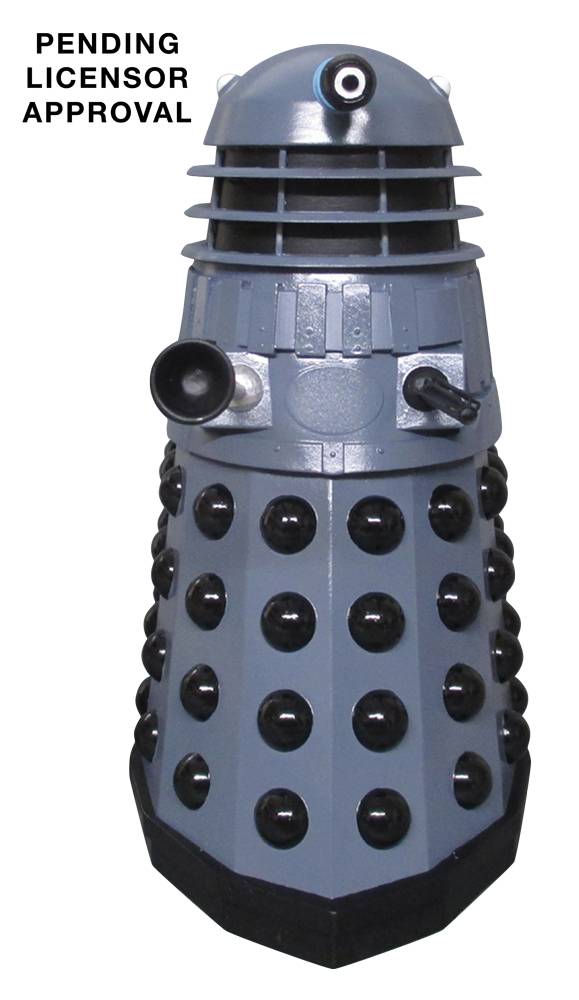 # #
JUL201944
The Daleks were created by leading Kaled scientist Davros to end the war between the Kaleds and the Thals and take power, but he was seemingly killed by his own creation. The Fourth Doctor (Tom Baker) is sent to Skaro to alter the development of the Daleks or, if he can't, to destroy them. If the Doctor can't give the Daleks a conscience, will he rid the universe of their terror?
On Skaro, two races were fighting a generations-long war - the warrior race the Thals and a race of philosophers and teachers called the Kaleds. In an effort to end the war and house mutated Kaleds, their leading scientist and megalomaniac Davros believes that through his creations, the "Mark III travel machines" or "Daleks", he can become the supreme being and ruler of the Universe. He uses them to arrange the extinction of his own people and the Thals, but the Daleks ultimately turn on Davros, killing his supporters and shooting him.
The figurine shows the Daleks as they appear in the 1975 adventure Genesis of the Daleks, recreated in die-cast metal as official hand-painted models. The model is accompanied by an in-depth profile magazine, including concept art and interviews about the evolution of the Doctor Who villains.
In Shops: Nov 25, 2020
SRP: $124.95