Infinite Destinies Returns the Infinity Stones to the Marvel Universe 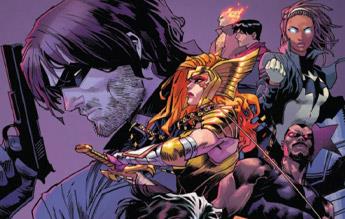 Strikeforce finds themselves divided between their mission to contain the dangerous Vridai and the sweet, sweet taste of competitive victory. Can this team of misfits stay together long enough to complete their mission?

Alex Ross Offers a Look into the Making of a Timeless Mural in Marvel’s NYC Office
Jul 28, 2020