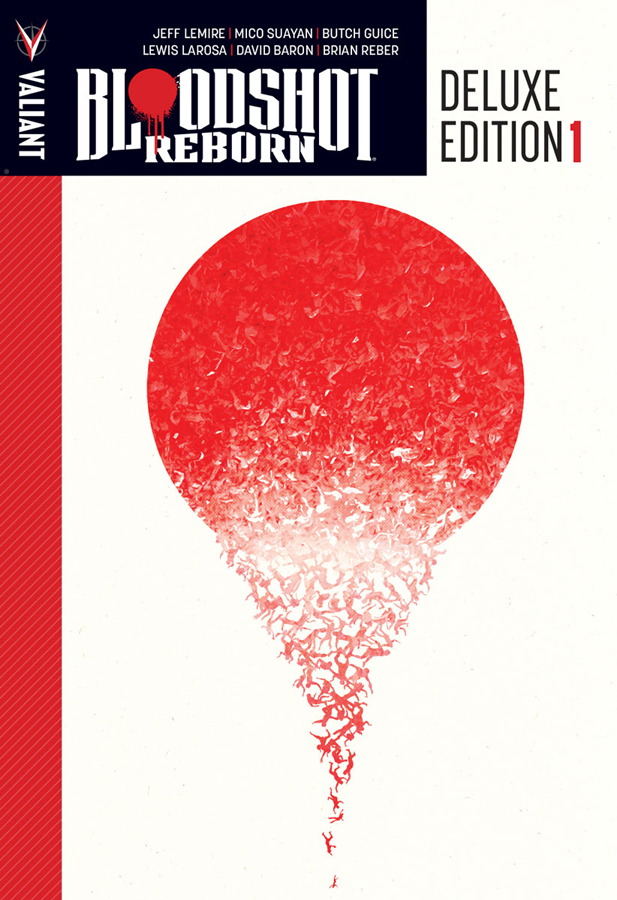 SEP162080
(W) Jeff Lemire (A) Mico Suayan, Butch Guice, Raul Allen, Tom Palmer, Lewis LaRosa, Stefano Gaudiano (CA) Juan Doe
Join New York Times best-selling writer Jeff Lemire (THE VALIANT) and acclaimed artists Mico Suayan (HARBINGER), Butch Guice (The Winter Soldier), and Lewis LaRosa (Punisher) for the first deluxe, oversized hardcover collection of the series named one of the year's best by IGN, Comic Vine, Uproxx and many more!
Bloodshot's nanites made him a nearly unstoppable killing machine. His enhanced strength, speed, endurance, and healing made him the perfect weapon, and he served his masters at Project Rising Spirit - a private contractor trafficking in violence - very well. Now, Bloodshot is a shadow of his former self. He lives in self-imposed exile, reeling from the consequences of his past life and the recent events that nearly drove him mad. But when a rash of shootings by gunmen who appear to look just like Bloodshot begin, his guilt will send him on a mission to stop the killers, even if it means diving head-long into the violence that nearly destroyed him. Collecting BLOODSHOT REBORN #1-13.
In Shops: Nov 30, 2016
SRP: $39.99
View All Items In This Series
ORDER WISH LIST