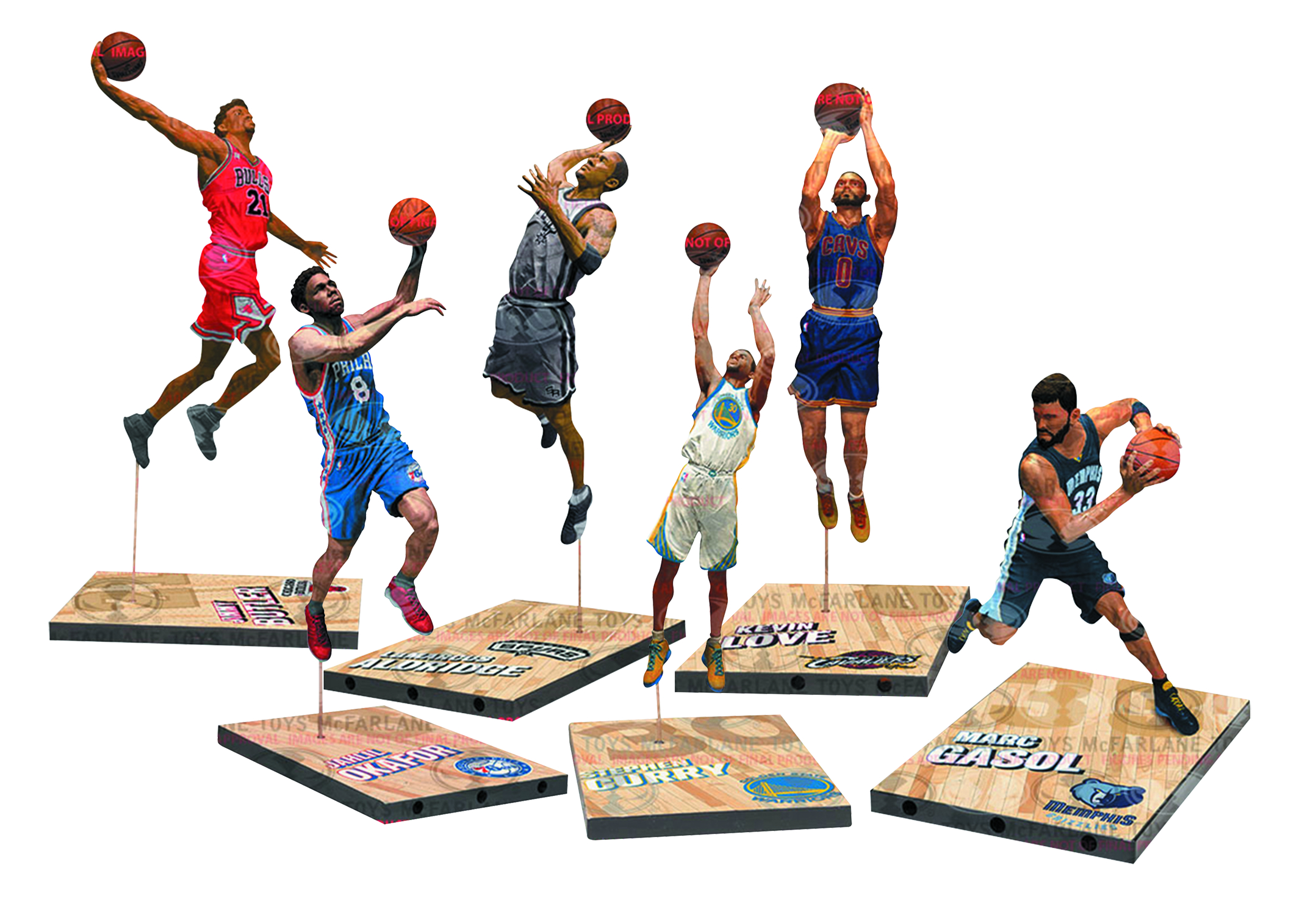 SEP158035
From McFarlane Toys. With the 2015-2016 NBA season just around the corner, McFarlane Toys is ready to call their next lineup to the floor. NBA Series 28 showcases a fresh-faced All-Star roster featuring four SportsPicks debuts, including the 2015 Collegiate National Player of the Year! This electric lineup is anchored by two returning superstars, a record-breaking power forward/center and the 2015 NBA Most Valuable Player! The Memphis Grizzlies center Marc Gasol has certainly stepped out of his brother's shadow these past few seasons, becoming both a two-time NBA All-Star and the first European player named NBA Defensive Player of the Year. Gasol makes his SportsPicks debut and is showcased pulling down another rebound in his navy away uniform. Four-time NBA All-Star power forward LaMarcus Aldridge is now with the San Antonio Spurs and making his SportsPicks debut. Aldridge was selected second overall in the 2006 NBA Draft. Aldridge is seen going up for a jam in his grey alternate uniform. Chicago Bulls shooting guard/small forward Jimmy Butler had a breakout 2014-2015 season, earning himself the title of 2014-15 Kia NBA Most Improved Player. Last season Butler consistently broke his own career high game after game and was named a 2015 NBA All-Star. Butler makes his SportsPicks debut and is featured making another slam dunk in his red away uniform. Golden State Warriors sharpshooter Stephen Curry returns to the lineup with an all new pose. Considered one of the greatest shooters in NBA history, Curry led the Warriors to their first NBA Championship since 1975 and was named 2015 NBA Most Valuable Player. Curry is immortalized taking yet another impossible shot in his white home uniform. Kevin Love, the Cleveland Cavaliers All-Star power forward/center, also returns in an all-new pose. Love currently holds the longest streak for consecutive games recording double figures in points and rebounds since the ABA-NBA merger. Love is featured pulling up for a jumper in his alternate blue uniform. 2015 Collegiate National Player of the Year Jahlil Okafor earned the USBWA National Freshman of the Year and ACC Player of the Year. Following Duke's victory in the NCAA championship game, Okafor announced that he would enter the 2015 NBA Draft. He was selected with the 3rd overall pick by the Philadelphia 76ers. Okafor makes his SportsPicks debut and is seen making an uncontested layup in his blue road uniform.