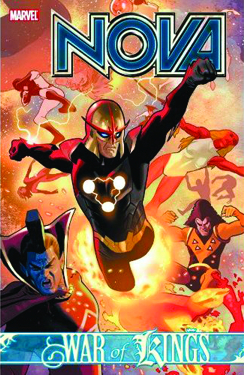 SEP090534
(W) Dan Abnett, Andy Lanning (A) Andrea DiVito (CA) Daniel Acu?a
Written by DAN ABNETT & ANDY LANNING
Penciled by ANDREA DIVITO
Cover by DANIEL ACU A
War of Kings brings a new era! Who is the new Protector of the Universe? Stripped of his Nova powers and facing death, Rich Rider must stop the Worldmind's plans before it's too late. But he needs power to do it, which may come from a source that will change his very identity! It's another unpredictable episode of the comic Ain't It Cool News calls "awesomely jaw-droppingly cool stuff." Collecting NOVA #23-28.
144 PGS./Rated T+ ...$16.99