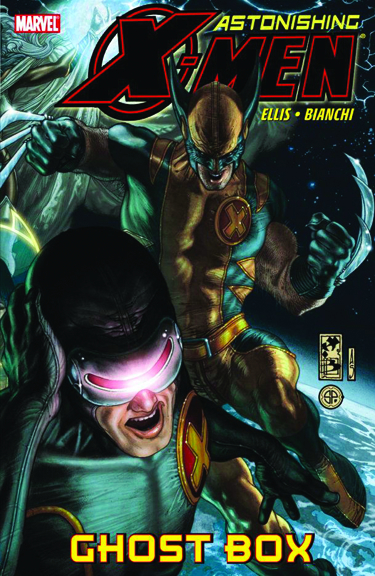 SEP090530
(W) Warren Ellis (A) Alan Davis, Kaare Andrews, Clayton Crain (A/CA) Simone Bianchi
Written by WARREN ELLIS
Penciled by SIMONE BIANCHI, ALAN DAVIS, ADI GRANOV, CLAYTON CRAIN & KAARE ANDREWS
Cover by SIMONE BIANCHI
The X-Men are called to the scene of a murder that appears to have involved heretofore unknown mutants. The team's resident scientist, Beast, discovers that though the victim was indeed a mutant, his mutation appears to be artificially produced. The team races to a spaceship graveyard in Indonesia in their search for the murderer, who they find huddled over the mysterious Ghost Box, preparing to activate it. The murderer reveals himself to also be a mutant, but commits suicide rather than give the X-Men any information as to his, or the Ghost Box's, origins. With mysterious, artificially created mutants popping up out of nowhere, the X-Men must struggle to unlock the mysteries of the Ghost Box: What is the device's purpose, and why was it sent to Earth? Collecting ASTONISHING X-MEN #25-30 and GHOST BOXES #1-2.
184 PGS./Rated T+ ...$24.99