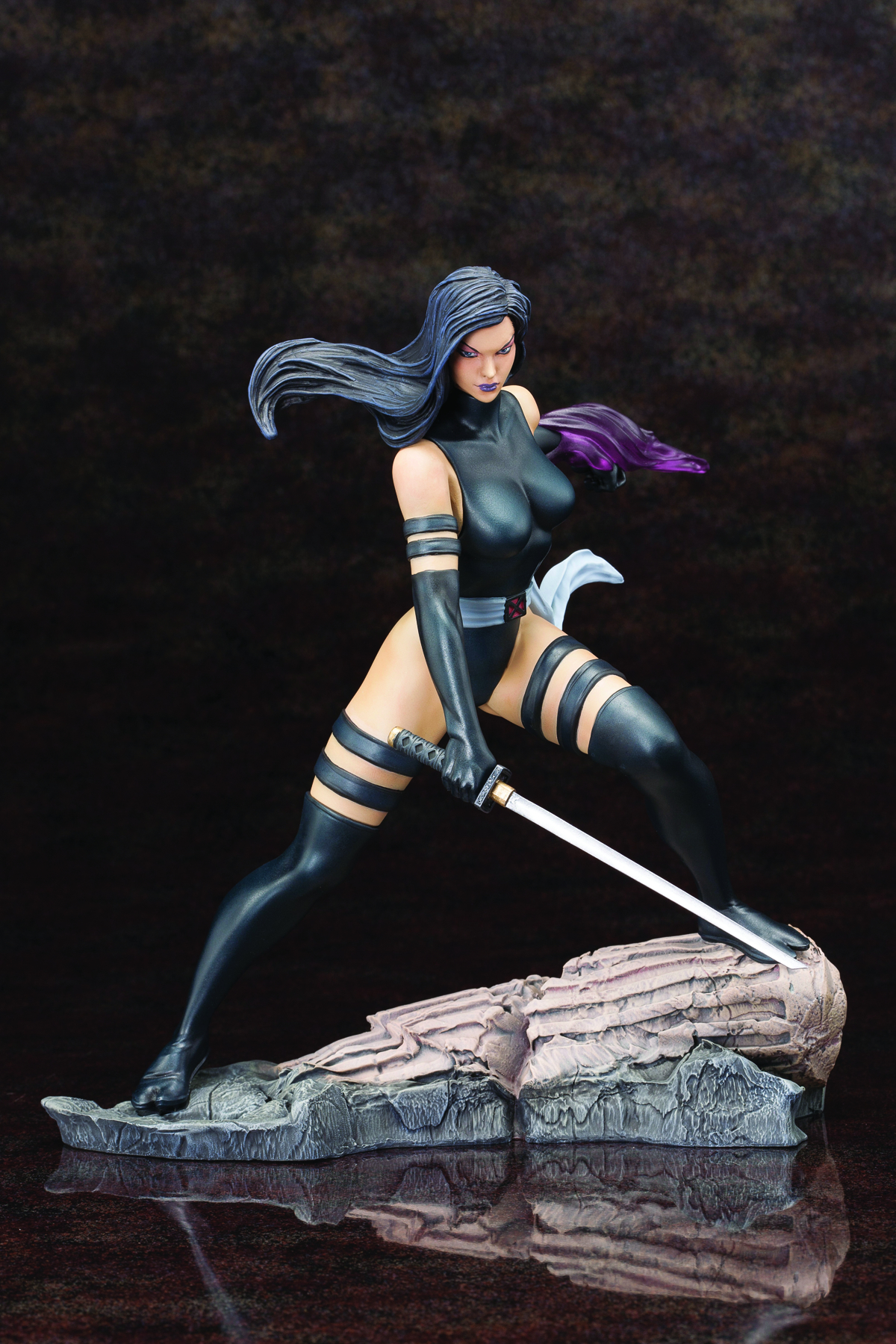 OCT132007
From Kotobukiya!  X-Force cannot be stopped!  The incredible Fine Art Statue line has captured members X-23, Warpath, Deadpool, Archangel, and Wolverine, and now it expands to include the telepathic mutant ninja and current leader of Uncanny X-Force, PSYLOCKE!  Once a British woman with minor mutant powers, Elizabeth "Betsy" Braddock's mind was transferred into the body of a ninja giving her additional martial arts prowess.  A long-time member of the X-Men, Psylocke more recently joined up with the brutal mutant hit squad X-Force, comprised of mutants willing to do anything to get the job done and protect the world.  Psylocke fit right in, using her awesome powers and debuting a cool monochrome costume.

The deadly telepathic mutant stands on a ruined battlefield, focused intently on her enemies and ready to attack!  Psylocke balances with her feet spread wide, gripping the broken pillar beneath her with her Japanese tabi-style boots.  She leans forward with one katana held in a low guard position before her, her other hand poised behind her to strike.  You can see the ninja training at work in Psylocke's perfectly held pose, with just the floating of her long purple hair and sash to show that the world is affecting her.  The powerful mutant wears her distinctive X-Force outfit consisting of a sleek black skin-tight costume, thigh high boots, long fingerless gloves, and unique straps around her upper arms and legs plus a white sash belt decorated with the red and black X-Force symbol.  As beautiful as she is deadly, Betsy's likeness is spot on and conveys her otherworldy grace.  As an added bonus, interchangeable parts let you display Psylocke with a second katana in her left hand or the swirling purple energy of her psychic knife!

Sculpted by Erick Sosa, Psylocke stands over 10 inches tall on her georama base in 1/6th scale with the other X-Force Fine Art Statues.  Get her while you can before this psychic ninja disappears!