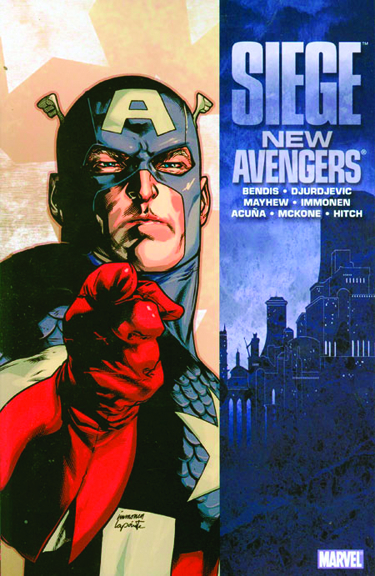 NOV100669
(W) Brian Michael Bendis (A) Various (CA) Stuart Immonen
Written by BRIAN MICHAEL BENDIS
Penciled by MARKO DJURDJEVIC, MIKE MAYHEW, STUART IMMONEN, MIKE MCKONE, BRYAN HITCH & STUART IMMONEN
Cover by STUART IMMONEN
The Avengers are on the run! The villainous Norman Osborn was the unlikely hero of Earth's victory over the alien Skrulls in the Secret Invasion, and he has used his newfound political cache to set himself up as the head of H.A.M.M.E.R., the new national peacekeeping force. Driven underground by the Superhuman Registration Act, the Avengers must battle Osborn behind the scenes. Osborn has anointed the Hood as the new kingpin of crime, and the Avengers must take on a gauntlet of the Hood's cronies - including the Mandrill, the Griffin and the Purple Man. All the while, Osborn's mania increases as he leads H.A.M.M.E.R., the U.S. military, and his own Dark Avengers in an invasion and siege of the fabled city of Asgard. Collecting NEW AVENGERS #61-64, NEW AVENGERS ANNUAL #3, THE LIST - AVENGERS and NEW AVENGERS FINALE.
224 PGS./Rated A