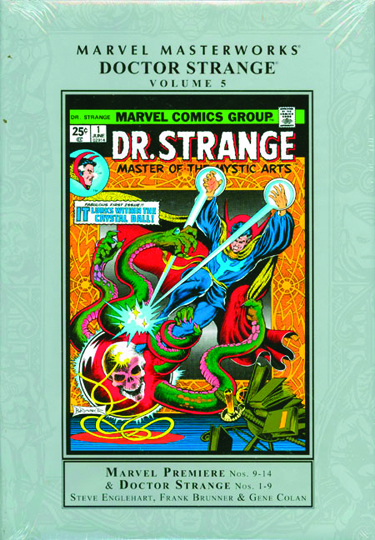 NOV100633
(W) Steve Englehart, Frank Brunner, Mike Friedrich (A) Gene Colan (A/CA) Frank Brunner
Written by STEVE ENGLEHART & FRANK BRUNNER with MIKE FRIEDRICH
Penciled by FRANK BRUNNER & GENE COLAN
Cover by FRANK BRUNNER
Entering the good Doctor Strange's world like a bolt from above, Steve Englehart and Frank Brunner teamed up to take the Master of the Mystic Arts to new heights of cosmic consciousness and other-dimensional adventure-and now you can experience it all in one amazing MARVEL MASTERWORKS edition! From the conclusion of the Shuma-Gorath saga and death of the Ancient One, to Stephen Strange's assumption of the mantle Sorcerer Supreme; from the time-lost "Sise-Neg Genesis" with Baron Mordo, to the classic Silver Dagger epic-these are Marvel comics at their very best! Brunner's art mixes a deliriously lush line with psychedelic stylings, while Englehart's scripting plumbs the depths of Strange's soul to create a strikingly personal epic that's just as challenging today as the first day it hit the racks. And with Gene Colan waiting in the wings for a massive Dormammu/Umar attack on Earth, there's no question what you have here is something special-a true MARVEL MASTERWORKS! Collecting MARVEL PREMIERE #9-14 & DOCTOR STRANGE #1-9.
288 PGS./All Ages