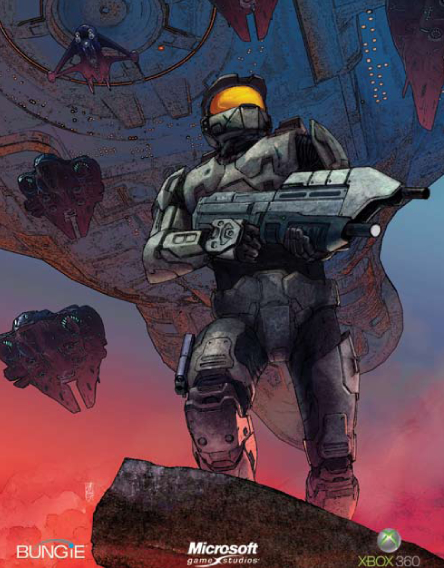 MAY072085
(W) Brian Michael Bendis (A) Alex Maleev
Written by BRIAN MICHAEL BENDIS
Pencils and Cover by ALEX MALEEV
The Eisner Award-winning team of superscribe Brian Michael Bendis and artist extraordinaire Alex Maleev unleash an epic story of mankind's struggle against the alien threat of the Covenant. Picking up from the conclusion of blockbuster video game Halo 2, the must-read issue reveals how the Master Chief, while onboard a hostile ship headed towards Earth, is battling against Covenant forces! Intertwined with Master Chief's interstellar one-man-war is the saga of a great American city's rebellion and downfall, two disparate lives' collision and shared fate, and the Convenant's hunt for an ancient relic of untold power and value. With hope dwindling and the fate of humanity hanging by a thread, is there any chance for a future? Read this debut issue to start the journey into the Halo universe!
40 PGS./17 and Up ...$3.99
This comic book is based on a Mature-rated video game.
Microsoft, Bungie, the Bungie logo, Halo, the Halo logos, the Microsoft Game Studios logo, Xbox 360, the Xbox logos are either registered trademarks or trademarks of
Microsoft Corporation in the United States and/or other countries and are used under license from owner. 2007 Microsoft Corporation. All rights reserved.