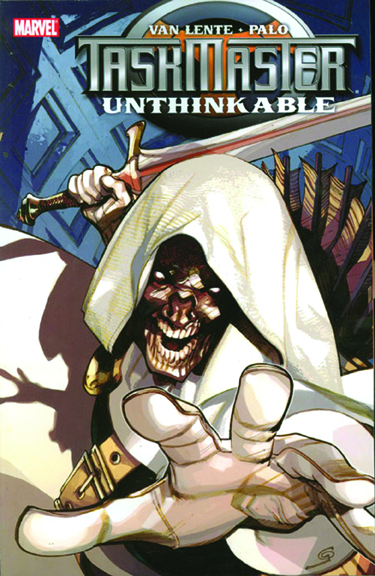 MAR110800
(A) Jefte Palo (CA) Alex Garner
Written by FRED VAN LENTE
Penciled by JEFTE PALO
Cover by ALEX GARNER
Taskmaster has trained henchmen for every terrorist organization and criminal cartel in the Marvel Universe. So when the rumor starts that he's turned traitor and now works for Steve Rogers, a billion-dollar bounty is put on his head. Now, every cadre of costumed fanatics - A.I.M., Hydra, Ultimatum, the Sons of the Serpent and more - is looking to collect. Taskmaster must fight hordes upon hordes of his psychopathic students while at the same time uncovering who framed him - which requires him figuring out who he really is! That's right, the man with the photographic reflexes has no memory of his true identity - and you'll learn the unexpected truth along with him! The action-packed secret origin comes courtesy of New York Times bestselling writer Fred Van Lente (AMAZING SPIDER-MAN) and acclaimed artist Jefte Paolo (DOCTOR VOODOO)! Collecting TASKMASTER #1-4 and material from AGE OF HEROES #3.
112 PGS./Rated T+