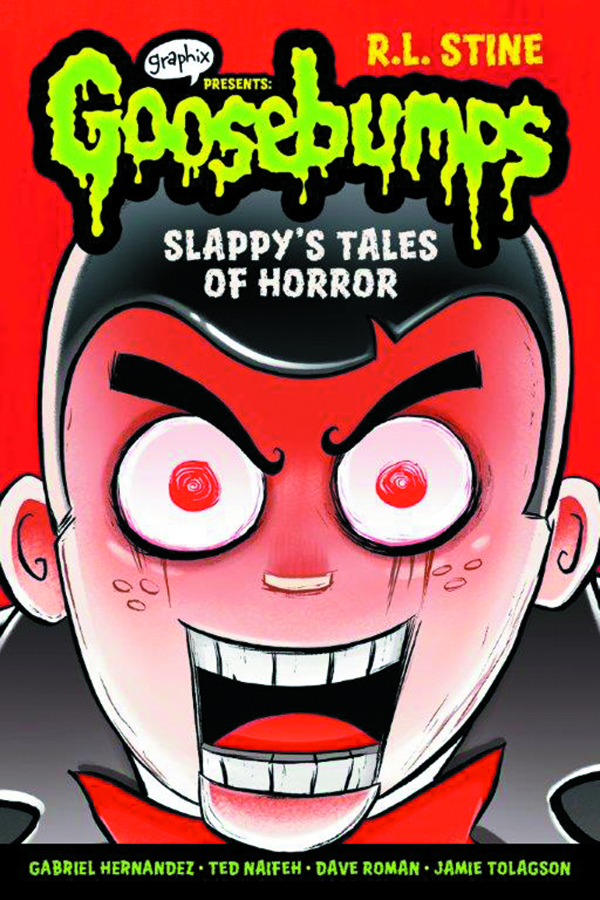 JUN151372
(W) R. L. Stine, Dave Roman (A) Ted Naifeh, Jamie Tolagson, Dave Roman
Four Goosebumps Graphix tales by master of horror R.L. Stine are adapted into full-color comics and feature a brand-new Slappy story by bestselling author, Dave Roman. The talented Dave Roman creates the horrifying drawings for "The Night of the Living Dummy," the origin story about that most evil of all ventriloquist dummies, Slappy! In "A Shocker on Shock Street," Jamie Tolagson captures the chilling tale of a brother and sister doing their dream job: testing rides in a movie studio theme park, where the special effects are really special. With his shadowy illustrations, Gabriel Hernandez creates the perfect atmosphere in "The Werewolf of Fever Swamp," a spooky story about a boy and his dog who go sniffing around in a lonely swamp... and wish they hadn't. Ted Naifeh is at his creepy best in "Ghost Beach," a scary ghost story about a brother and sister who investigate a local legend and discover a terrible secret about their family.
In Shops: Sep 02, 2015
SRP: $24.99
View All Items In This Series
ORDER WISH LIST