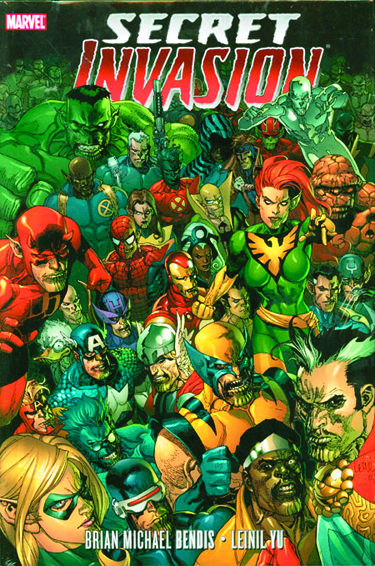 JUN100656
(W) Brian Michael Bendis (A/CA) Leinil Francis Yu
Written by BRIAN MICHAEL BENDIS
Penciled by LEINIL YU
Cover by LEINIL YU
Who do you trust? The shape-shifting alien race known as the Skrulls has secretly infiltrated every super-powered organization on Earth with one goal: full-scale invasion! Now, the invasion is here! The Marvel Universe is in shambles. The Skrull Empire's plan has birthed itself into perfection. It is hero vs. hero! Resurrections and reunions! Is Tony Stark a Skrull? Page after page unveils reveal after reveal and shocking moment after shocking moment! Brian Bendis and Leinil Francis Yu leap off the pages of mega-hit New Avengers and deliver a story that will forever alter the Marvel Universe! EXPECT CHANGE! This oversized hardcover comes packed with extras, including the original story pitch, script pages, art concepts/designs and more! Collecting SECRET INVASION #1-8.
288 PGS./Rated T+ ...$34.99