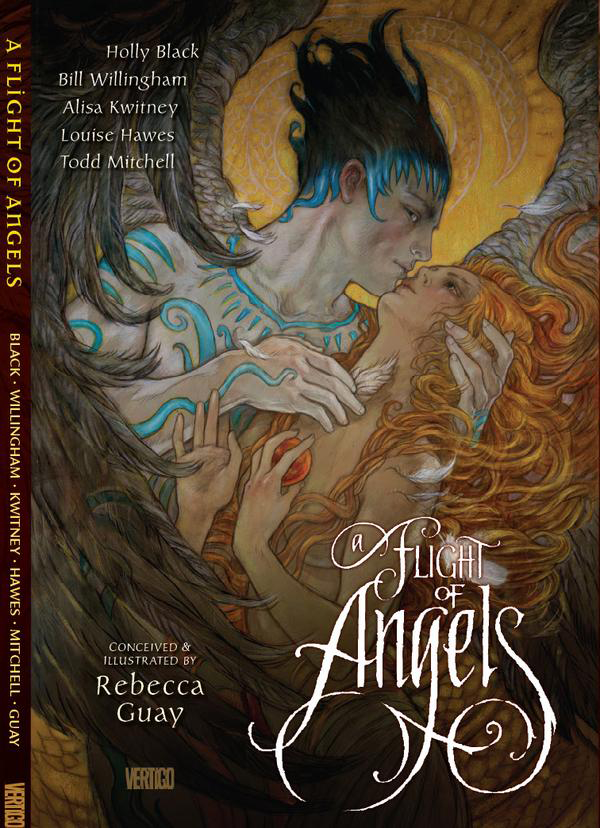 JUL110277
(W) Holly Black, Bill Willingham, Alisa Kwitney (A/CA) Rebecca Guay
Written by HOLLY BLACK, BILL WILLINGHAM, ALISA KWITNEY, LOUISE HAWES and T.D. MITCHELL
Conceived and illustrated by REBECCA GUAY
ANGELS: Guardians. Messengers. Warriors. Fallen.
All these angelic aspects and more are explored in A FLIGHT OF ANGELS, a riveting tale in the tradition of The Decameron and The Canterbury Tales.
A mysterious angel plummets to Earth and lands deep in a dark forest, where his dying body is found by the mystical denizens of this strange place. As the gathered fauns, fairies, hags and hobgoblins debate what to do with him, each tells a different story of who they imagine this celestial creature to be: a hero, a lover, a protector or a killer. Once the stories have been told, a verdict is rendered - and the outcome will leave you breathless. Conceived and stunningly illustrated by fantasy art legend Rebecca Guay (Magic: The Gathering, Veils), A FLIGHT OF ANGELS is written by an all-star line-up of today's top fantasy talent, including Bill Willingham (FABLES) and Holly Black (The Spiderwick Chronicles) in tales that will grip your heart and make your imagination soar.