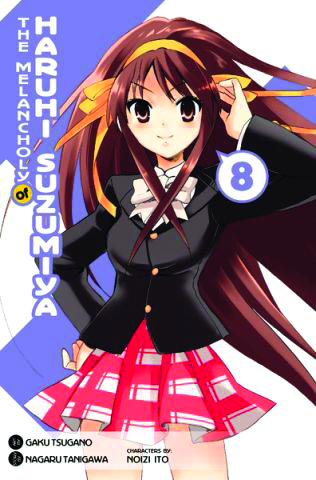 JAN111395
(W) Noizi Ito, Nagaru Tanigawa (A/CA) Gaku Tsugano
(W) Nagaru Tanigawa, Noizi Ito (A) Gaku Tsugano
Something very strange is going on. The SOS Brigade and Haruhi Suzumiya's obsession with uncovering mysteries have disappeared. Kyon seems to be the only one who remembers anything about the infamous SOS Brigade and its members - the former time traveler Mikuru Asahina (now a normal student), the former alien Nagato (now a timid bookworm), or the energetic Haruhi Suzumiya (now nowhere to be found)! Just where is Haruhi? Not to mention member number three, esper Koziumi? And why is Kyon, who so often longed for a normal life, so upset to find it all gone?