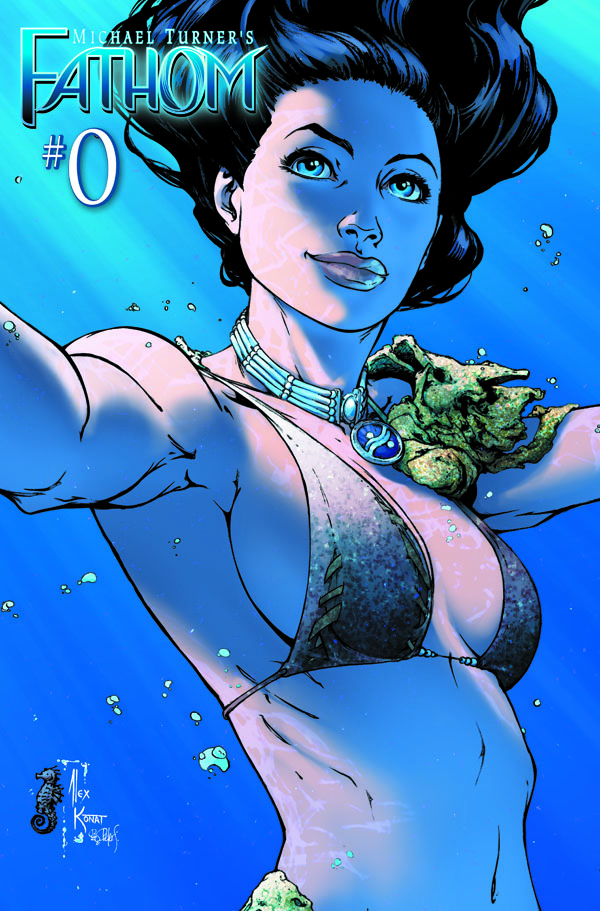 FEB110766
(W) Scott Lobdell (A/CA) Alex Konat
The thrilling world below the waves resurfaces this Spring - but, everything has changed!
Aspen Matthews awakens in an unknown laboratory, heavily secured by armed guards. Uncertain of where she is or what's going on, Aspen must quickly uncover the clues to her present situation. But, what if she's not the one trapped by guards. What if they're the ones trapped by her? And what if the answers she seeks are far more-cataclysmic-than she could ever have anticipated?!? Mystery, adventure, and the truth lie ahead in the pulse-pounding latest chapter of Michael Turner's FATHOM!
With FATHOM's long awaited return at hand, some new creators and several familiar names are along for the ride! Artist extraordinaire Alex Konat of Mindfield fame is joined by acclaimed writer Scott Lobdell, a newcomer to the world of
FATHOM, but ready to make his mark on the series unlike anything you've ever seen before. Colorist Beth Sotelo also joins
the FATHOM family and brings her lush color pallet to the world of the Blue!
Featuring an all-new 12-page story that sets the stage for the brand-new FATHOM #1 issue heading your way next month,
make sure to get in on the ground floor of FATHOM's next exciting story arc! Complete with an additional sketchbook
section, never before seen art, and a stunning cover by series artist Alex Konat, this special #0 issue is not to be missed!