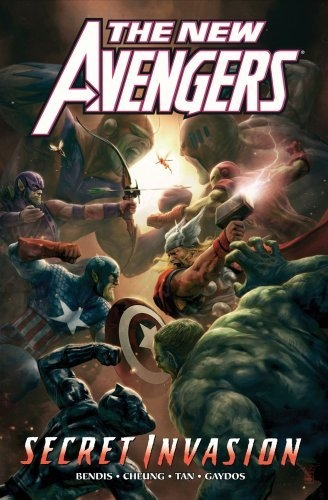 FEB092627
(W) Brian Michael Bendis (A) Jim Cheung, Billy Tan (CA) Aleksi Briclot
Written by BRIAN MICHAEL BENDIS
Penciled by BILLY TAN, JIM CHEUNG & MICHAEL GAYDOS
Cover by ALEKSI BRICLOT
SPIDER-MAN VERSUS CAPTAIN AMERICA IN THE JUNGLES OF THE SAVAGE LAND! But who is who and what is what?? At least one of these people isn't who they say they are. Plus a huge chapter in the Secret Invasion story as more information as to how the Skrulls set their major plans in motion is revealed... Plus, The dark secret of the Illuminati. Could it have brought about the Secret Invasion? And what happened to the Skrulls during the legendary HOUSE OF M event? Also, the Hood must discover the true secret behind his powers. Collecting NEW AVENGERS #43-47.
128 PGS./Rated A ...$14.99