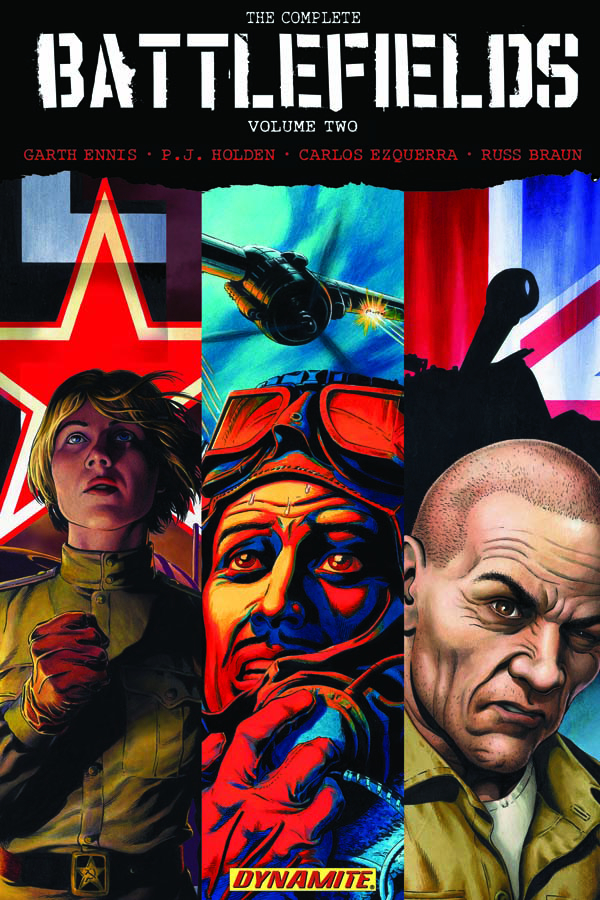 DEC100870
(W) Garth Ennis (A) P. J. Holden, Carlos Esquerra, Russell Braun (CA) Garry Leach
All three acclaimed Ennis Battlefields books from Volume Two of the series in one massive hardcover collected edition! Includes:
BATTLEFIELDS: HAPPY VALLEY (by Garth Ennis & PJ Holden)
England, January 1942: young Australian Ken Harding arrives at his first operational squadron, keen to play his part in the aerial attack on Germany as the commander of a bomber crew. Losses have been high and life expectancy is low, but Ken remains undaunted- until he meets his crew, a foulmouthed, battle-hardened bunch with no time for new boys who can't stand the pace. Together, they must take the war to the enemy over the most heavily-defended region of the Third Reich- the industrial heartland of the Ruhr, known to the men who face the flak and nightfighters as Happy Valley.
BATTLEFIELDS: FIRELFY & HIS MAJESTY (by Garth Ennis & Carlos Ezquerra)
The Tankies' Sergeant Stiles returns, recently promoted and angrier than ever! He's got a new crew and a new tank - a Sherman Firefly with a high-velocity gun capable of taking out even the fearsome German Tiger. Too bad the enemy have a new tank of their own - the mighty King Tiger, with twice the armor and firepower of the original. As Stiles and his men join the Allied advance into the Nazi homeland, they soon realize that every inch of ground will be bitterly contested by the foe... and that there are worse horrors than Tigers lurking in the gloom of the last German winter.
BATTLEFIELD: MOTHERLAND (by Garth Ennis & Russ Braun)
Lieutenant Anna Kharkova is posted to single-seat fighter aircraft and sent straight into action. Hardened and embittered by the loss of her comrades, Anna is only too keen to get her teeth into the enemy- but with Russian and German armies about to collide in the titanic battle of Kursk, her first flight with her new squadron may well be her last. And once the Soviet secret police start sniffing around, death in battle may well be preferable anyway. Soon horrific losses land Anna with the very last thing she wants: more responsibility, in the shape of eight young replacement pilots to be trained for combat. But with the Battle of Kursk reaching its climax, rookies are nothing but lambs to the slaughter- and even the most experienced pilots find themselves flying on borrowed time. The former Night Witch meets her destiny, as Motherland- and the second series of Battlefields- conclude with a bang.
This massive 200+ page hardcover edition also features bonus materials such as sketches and commentary from Ennis along with a complete cover gallery by series cover artist Garry Leach! NOTE: Advance-solicit for April 2011
MATURE THEMES
In Shops: Jul 06, 2011
SRP: $29.99
View All Items In This Series