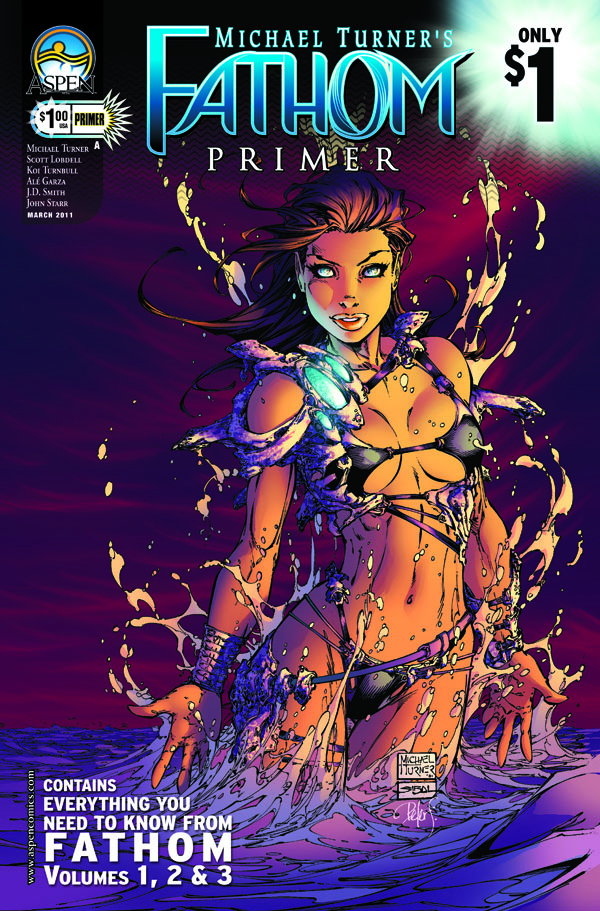 DEC100759
(W) Various (A) Various (CA) Michael Turner
(W) Michael Turner, Scott Lobdell
(A) Michael Turner, Koi Turnbull, Ale Garza
There are two worlds we know, the one above and the one below...
In 1998, superstar artist Michael Turner created a world of shear wonder and awe beneath the surface of the ocean. Now, over 12 years later and prior to the release of FATHOM: Volume 4, you can relive the amazing journey of Aspen Matthews and her discovery of life beneath the waves in this awesome introductory $1 issue of FATHOM. Compiling together all of the exciting, must-see moments of the first three volumes of Turner's thrilling action-adventure series, brand-new FATHOM writer and acclaimed veteran scribe Scott Lobdell, along with Turner and the rest of the incredible talent that has contributed to the title over the years, take you on a pulse-pounding journey back through all the important benchmarks in the FATHOM universe, as they prepare you for the surprising upcoming events of FATHOM: Volume 4 along the way!
It's the perfect way to introduce old and new fans alike to the world of FATHOM, as over a decade's worth of answers and excitement spills out onto the pages of this amazing, value priced, all-in-one FATHOM: PRIMER issue!