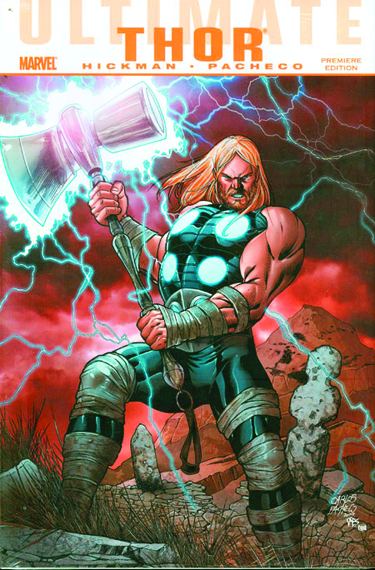 DEC100662
(W) Jonathan Hickman (A/CA) Carlos Pacheco
Written by JONATHAN HICKMAN
Penciled by CARLOS PACHECO
Cover by CARLOS PACHECO
Exploding from the pages of THE ULTIMATES comes Ultimate Thor! Don't miss the superstar team-up of Jonathan Hickman and Carlos Pacheco as they go back to the beginning and reveal the origin of Thor, Loki and the rest of Asgard! Ragnorak has descended, and Asgard sits at the edge of the end. What will become of Thor and the Warriors Three? And what exactly does Baron Zemo, mysterious commander for the Nazis, have to do with it all? ULTIMATE COMICS THOR brings you the untold story of Thor's thunderous debut! Collecting ULTIMATE COMICS THOR #1-4.
112 PGS./Rated T+