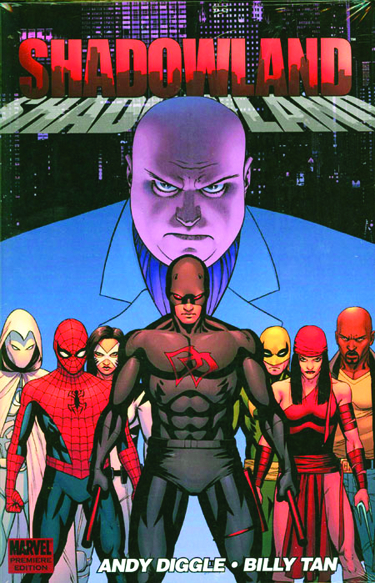 DEC100657
(W) Andy Diggle (CA) John Cassaday (A/CA) Billy Tan
Written by ANDY DIGGLE
Penciled by BILLY TAN
Covers by JOHN CASSADAY & BILLY TAN
Pushed beyond his limits, Matt Murdock dared evil...and lost! The battle for the soul of a hero - and a city - begins as Daredevil faces off for a final time against his deadliest foe, Bullseye, in their most brutal battle ever...with more than just Hell's Kitchen at stake. And when the Man Without Fear does the unthinkable, Spider-Man, Luke Cage, Iron Fist, the Punisher and more join forces to stop the war breaking out throughout New York - with Daredevil at the center. This event will change the streets of New York City, and the heroes that protect it, forever. Collecting SHADOWLAND #1-5 and material from X-MEN: CURSE OF THE MUTANTS SPOTLIGHT.
136 PGS./Rated T+