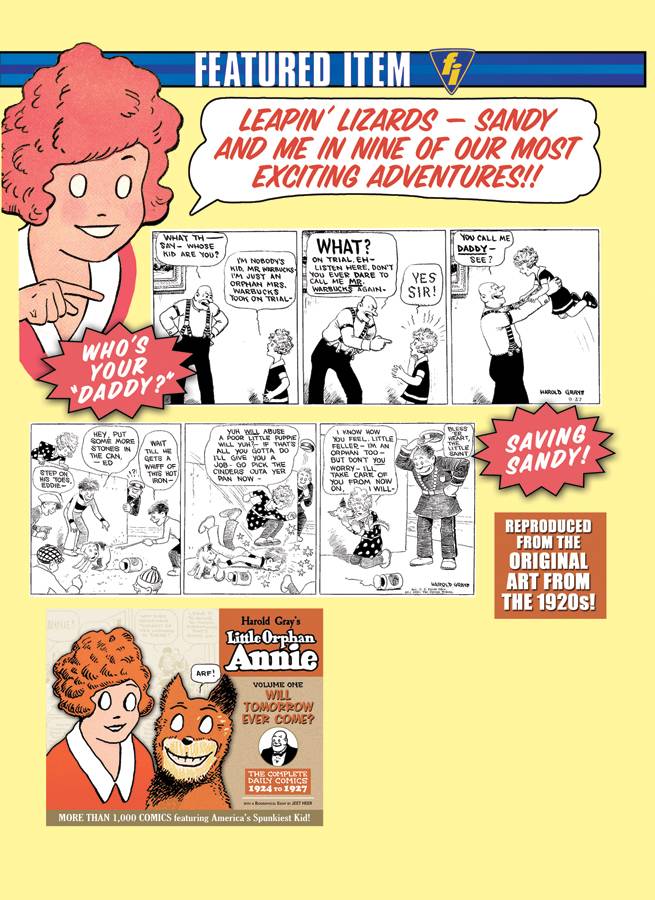 #
DEC073713
(W) Harold Gray (A/CA) Harold Gray
The Complete Little Orphan Annie is the second series to be released under IDW's The Library of American Comics imprint, edited and designed by Dean Mullaney.

Volume One will contain more than 1,000 daily comics in nine complete stories, from the very first strip in August 1924 through October 1927. In the pages of "Will Tomorrow Ever Come?" readers will discover how Annie escapes the orphanage and is ultimately adopted by "Daddy;" how she finds that loveable mutt Sandy and rescues him from being tortured; how she meets the Silos, who become recurring characters throughout the series; how she joins the circus and first encounters Pee Wee the elephant; and how, broke and alone, she hits the road on a succession of dangerous yet spiritually uplifting adventures. This volume also includes an index, and a biographical essay by Jeet Heer.

"With Dick Tracy, Terry & the Pirates and Little Orphan Annie, IDW has the crown jewels of the world famous New York News-Chicago Tribune comics section, making the California-based company a major player in what has become a new golden age of comic strip reprints," reports ICv2.
In Shops: Jun 11, 2008
SRP: $39.99
View All Items In This Series
ORDER SUBSCRIBE WISH LIST