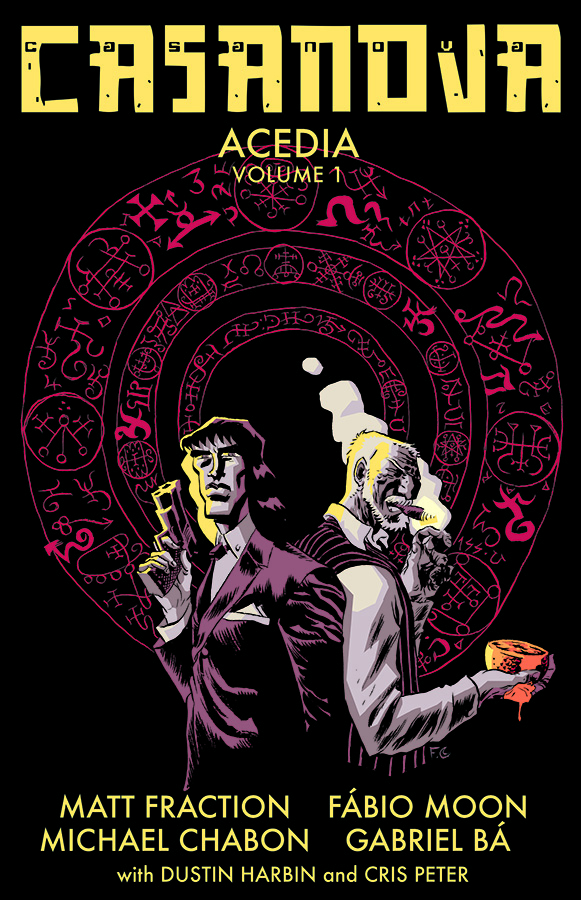 AUG150556
(W) Matt Fraction, Michael Chabon (A/CA) F?bio Moon, Gabriel Ba
Casanova Quinn, interdimensional superspy and assassin, has  crashlanded here on  Earth-on OUR Earth-with absolutely no memory of who he is or the things he's done. He works for a man with just as mysterious a past as his own and has found the New Normal of his life under the name "Quentin Cassaday." That's when the end of the world begins. With nine days to a supposed apocalypse, Los Angeles simmers in fear as a weird cult readies itself  for what comes next...and what comes next runs straight through Casanova Quinn.  By Eisner Award-winning writer MATT FRACTION (SEX CRIMINALS, ODY-C, SATELLITE SAM) and with art by international superstar FÁBIO MOON (Two Brothers, Daytripper), this volume also features exclusive back-up stories written by Pulitzer Prize-winning novelist MICHAEL CHABON (Telegraph Avenue , The Amazing Adventures of Kavalier and Klay) and drawn by CASANOVA co-creator GABRIEL BÁ ( The Umbrella Academy, Two Brothers) that tells the story of the women tasked with hunting Casanova Quinn down across space and time.