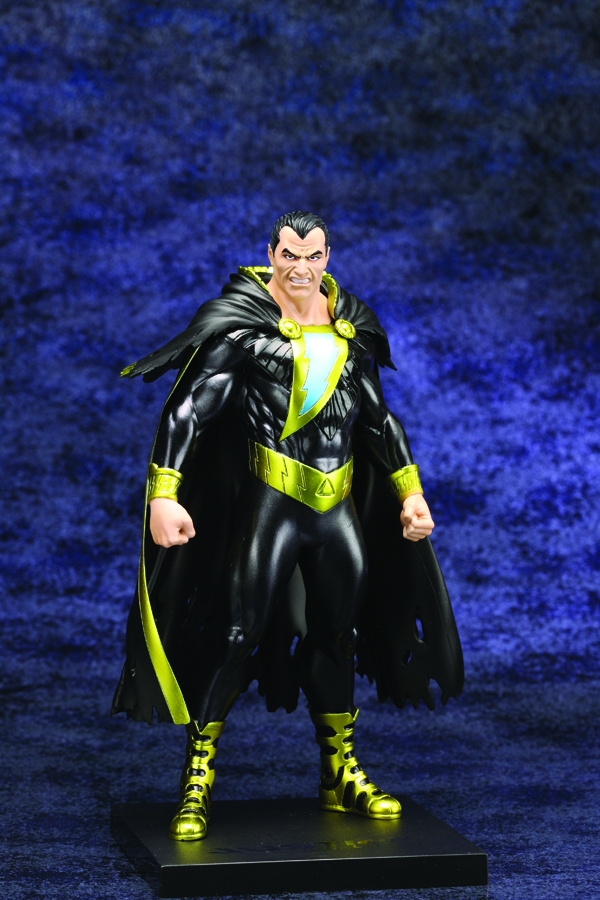 AUG132156
A KOTOBUKIYA JAPANESE IMPORT! In the post-Flashpoint universe, Black Adam was mentioned by Dr. Sivana while listening to witness reports of the wizard Shazam. Sivana mentions that Black Adam was a slave who was teleported from his prison cell to the Rock of Eternity and granted his powers by the wizard. Adam then went on to save Khandaq from the Seven Deadly Sins before vanishing. During Dr. Sivana's explanation, drawings of Black Adam are shown in a historical text, displaying a slightly different look from his previous incarnations. Dr. Sivana later uses his new-found magic eye inside of some ruins to read a magically hidden hieroglyph that makes the wall explode, releasing Black Adam from his tomb. Adam is then shown in a revamped version of his original costume, which includes a cape, hood, and a metallic belt instead of a sash. His lightning bolt appears as an opening into his body with magical energy visibly inside of him.
Kotobukiya proudly presents the next villian in their ARTFX+ line based on Super Heroes and Villians from DC Comics: Shazam's nemesis Black Adam! Standing 20 cm (7.9 in) tall in 1/10th scale, Black Adam displays all the finely sculpted detailing of Kotobukiya's ARTFX+ line. In his black suit and frayed cape, Black Adam stands, fists clenched, as the perfect counterpoint to Shazam Like all ARTFX+ statues, Black Adam has magnets embedded in his feet for extra stability on the included display base Black Adam is impressive on his own, but looks even better posed with the Shazam ARTFX+ statue!
In Shops: Feb 05, 2014
SRP: $49.99