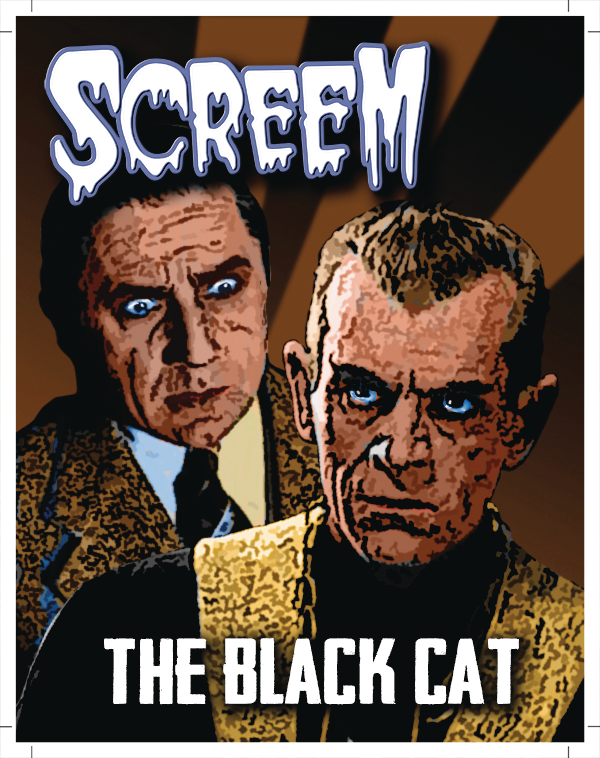 APR191934
:  Screem welcomes in summer with a hot as hell edition! Our newsstand cover features Harold the Scarecrow from the upcoming film SCARY STORIES TO TELL IN THE DARK.
Produced by Guellermo del Toro and directed by Andre Ovredal (TROLLHUNTER, THE AUTOPSY OF JANE DOE), there's plenty of buzz that the popular Alvin Schwartz book series will make quite a splash on the big screen. Screem chats with director Ovredal, and discovers what he has in store for fans. Our Diamond exclusive cover by award winning artist Mark Maddox pairs the legendary duo of Boris Karloff and Bela Lugosi from the film THE BLACK CAT, as we celebrate the Scream Factory Blu-ray box set: THE BORIS KARLOFF/BELA LUGOSI collection.  The set showcases four films (THE BLACK CAT, THE RAVEN, THE INVISIBLE RAY and BLACK FRIDAY, all which make their debut in the high definition format. Speaking of pairing up, what do you get when you mix Kung Fu and vampires? The answer is bloody simple, Grasshopper---THE LEGEND OF THE SEVEN GOLDEN VAMPIRES. When Hammer and Shaw Bros. studios got together in 1974 to create this one-off production, fans of both genres were curious to see how this new mix would work, and it was a hit with both camps. The film has been out of print in the digital format for almost a decade, and it's now getting the royal Blu-ray treatment. Writer Andy Rausch continues his popular DIRECTOR'S CHAIR column in Screem, and his guest is Peter Walker, best known for directing the horror classics THE WHIP AND THE BODY, HOUSE OF THE LONG SHADOWS, SCHIZO and HOUSE OF WHIPCORD. Beloved actor DICK MILLER recently passed away, a new biography titled YOU DON'T KNOW ME, BUT YOU LOVE ME: THE LIVES OF DICK MILLER examines the work of an actor who had been in the business for over sixty years. We  chat with the book's author Caelum Vatnsdal. All this, plus the usual large amount of movie reviews await you in SCREEM MAGAZINE #37!
In Shops: Aug 07, 2019
SRP: $9.95
View All Items In This Series