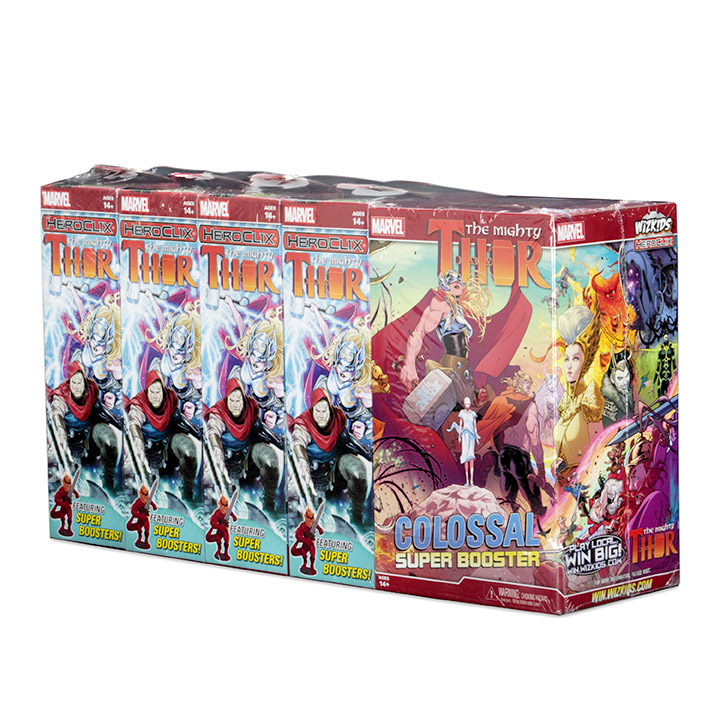 APR173304
Defend Asgard and the Ten Realms from all foes that stand in the way as The Mighty Thor calls down the lightning in his triumphant return to Marvel HeroClix! Marvel HeroClix: The Mighty Thor storms onto the scene with new ways to equip powerful weapons and plenty of returning characters including Asgardian allies like Sif, Balder, and The Warriors Three, as well as classic Thor villains Loki, Skurge, The Enchantress, and Hela. Longstanding HeroClix favorite The Incredible Hulk returns, alongside Throg and Thor-buster Iron Man. Plus, with the addition of Colossal Super Boosters, look for larger-than-life friends like Groot and monstrous foes like Surtur to command the battlefield. Build new teams with subthemes including Asgardians, Avengers, Eternals, the Serpent Society, and the Masters of Evil. And, for the first time ever in HeroClix, Asgardians and their enemies will have the Legendary Wielder trait, allowing them to utilize their signature weapons and artifacts. Featuring over 70 new figures to collect and play, each Marvel HeroClix: The Mighty Thor Booster Brick contains eight standard 5-figure boosters as well as one Super booster.
In Shops: Aug 30, 2017
SRP: $132.90