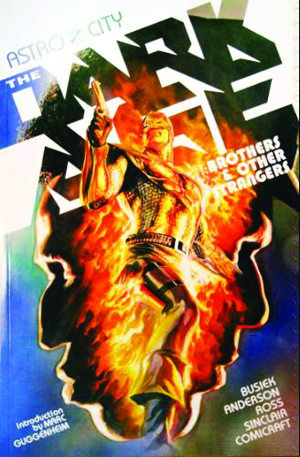 APR090235
(W) Kurt Busiek (A) Brent Eric Anderson (CA) Alex Ross
Written by Kurt Busiek
Art by Brent Anderson
Cover by Alex Ross
Collecting the first eight chapters of the 16-part "Dark Age" saga, revealing the history of Astro City and shedding light on some of its greatest heroes! Book One, now in trade paperback, takes place in the early 1970s and follows two brothers - with one becoming a hero and the other taking a far different path. Along the way, the long-standing secret tale of the Silver Agent and his fate is told at last, as the story shifts back to the 1950s and what made the Williams brothers turn out so differently.
Advance-solicited; on sale July 15 •  256 pg, FC, $19.99 US
In Shops: Jul 15, 2009
SRP: $19.99
View All Items In This Series