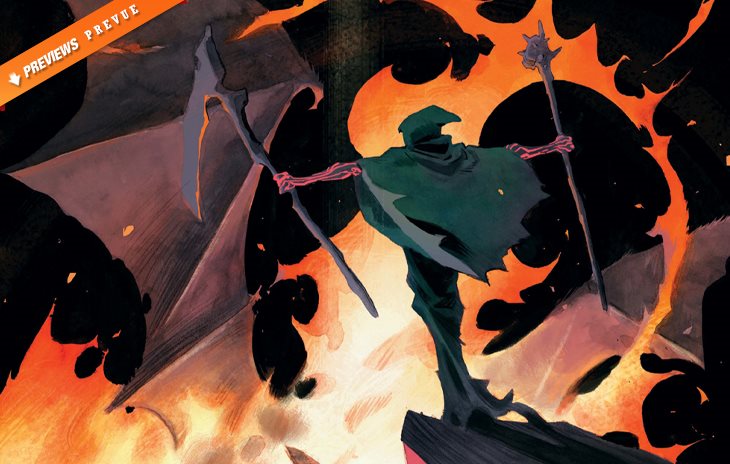 PREVIEWS Prevue: 'Once & Future' 15 from Boom! Studios Jan 15, 2021 A first look at ONCE & FUTURE #15, continuing a new story arc in the critically acclaimed series
BOOM! Studios

To save the town, Erica must take on the brood of monsters on her own. And Tommy is faced with a decision that means life or death.

BOOM! Studios is proud to reveal a first look at THE RED MOTHER #12, the final issue of the original comic book series from acclaimed writer Jeremy Haun (The Beauty, The Realm), artist Danny Luckert (Regression)

Two Saturday morning powerhouses of 90s nostalgia meet for the first time in Power Rangers TMNT, one of 2020's most fun crossover events. We talk with the creators behind this miniseries to find out how this exciting series came together.

An indigenous warrior seeking revenge against those who invaded her land, an African musician fighting for freedom, and a Portuguese sailor in search of redemption. It all happens within the pages of NEW WORLD from BOOM! Studios!

Featuring a cover from Middlewest's Jorge Corona, for fans of Wynd in the same oversized format comes an all-new modern fairy tale from Conor McCreery.

Originally scheduled for release in 2020 as part of key convention stops around the United States, these variant covers will now be exclusively available in extremely limited quantities through comic shop retailers on February 24, 2021.

ORCS! is an all-new original six-issue comic book series by cartoonist, Christine Larsen (Adventure Time, By Night), about a band of misfit Orcs who set off into the great, wide Known World in search of glory and gold but find something else along the way.

BOOM! Studios have announced a new original graphic novel Girlsplaining: A (Sorta) Memoir, by cartoonist Katja Klengel, tackling the subjects that have shaped her life.

HBO Max has secured the rights to BOOM! Studios' Eisner Award-winning graphic novels Lumberjanes as an animated series, with She-Ra and the Princesses of Power creator and showrunner Noelle Stevenson set to adapt and executive produce.