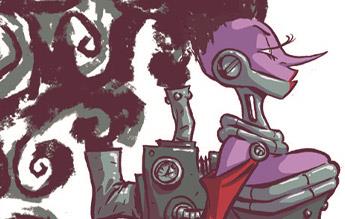 Cult favorite The Ludocrats by Kieron Gillen, writer Jim Rossignol, artist Jeff Stokely, and colorist Tamra Bonvillain’s smolders with a hot alternative cover by Skottie Young for the final issue. See it inside!

'Inkblot' Trailer: Meet the Next Generation of the Kubert Family
Aug 10, 2020