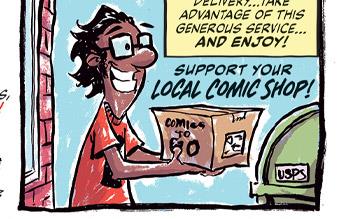 Image Wants to Let You Know How to Safely Support Your Local Comic Shop
Mar 20, 2020

Image Comics shared this fun webcomic so you can see how you can still support your local comic shop during this trying time. Check it out inside!

Enter the Dark, Twisted Mind of a Tortured Musician in the Original Graphic Novel Blue in Green
Mar 16, 2020