Chuck Brown Teams with Prenzy for the Hyper-stylized Series, On the Stump 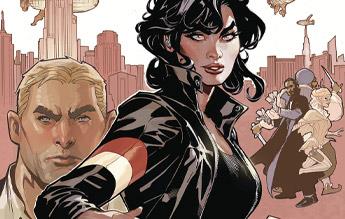 Eighty years after Adventureman's apparent demise, single mother Claire and her Adventurefan son Tommy seem to be the only two people alive that remember the Adventureman sagas, but from that memory burns The Spark of Resurrection! Matt Fraction and Terry & Rachel Dodson invite you on a new adventure!