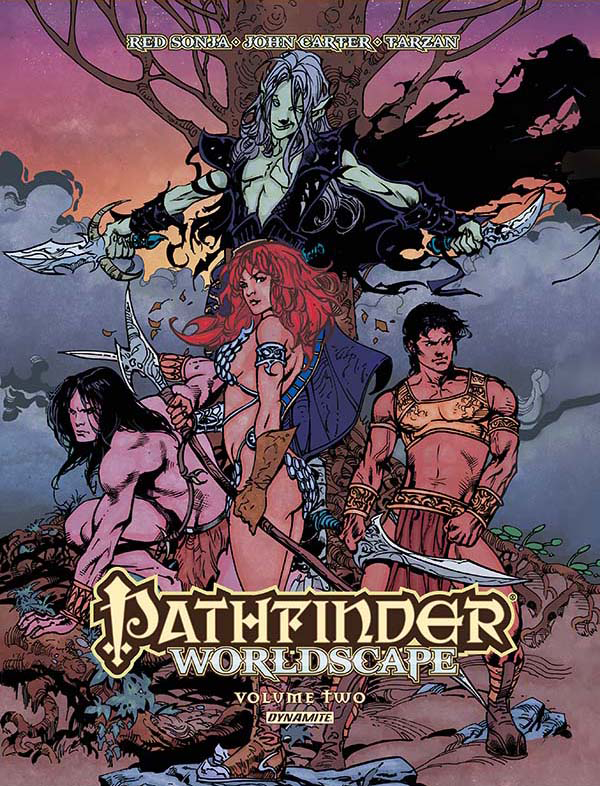 SEP171524
(W) Erik Mona, James L. Sutter (A) Andrea Mutti, Tom Mandrake, Moritat (A/CA) Roberto Castro
Four new tales as part of Paizo's groundbreaking "Worldscape" saga, drawing the greatest fantasy heroes of literature and comics into the mythos of their award-winning fantasy world and tabletop RPG! In "Dungeon Queen of Mars", the unrivaled warrior Red Sonja must work with Cave Girl and King Rex to escape a dungeon with a religious icon of Issus, Goddess of Death and Life Eternal, to use as a bargaining chip in the grim political war of the Worldscape!
In "Rebels Without a Planet", a battle against a vicious red dragon maroons John Carter and the Martian Tars Tarkas in a dangerous jungle filled with monsters and the greatest soldiers of three worlds... including the Warlord of Mars' old adversary from the Civil War!
In "Forest of Nightmares", Tarzan clashes head-on with the original feral heroes of mythology: the demigods Romulus and Remus! The Lord of the Jungle must then brave the deadly wilds of the Worldscape to free his friends from slavery!
In "King of the Goblins", the iconic antihero and half-elf Seltyiel finds himself in the gladiatorial Worldscape, facing off against two of Earth's most sinister figures... while hassled by four trouble-prone goblins who look to him as their appointed chief!
Bonus materials include sixteen pages of character sheets, encounters, and world detail for the Pathfinder Roleplaying Game, plus an exclusive poster map.
In Shops: Nov 15, 2017
SRP: $19.99
View All Items In This Series