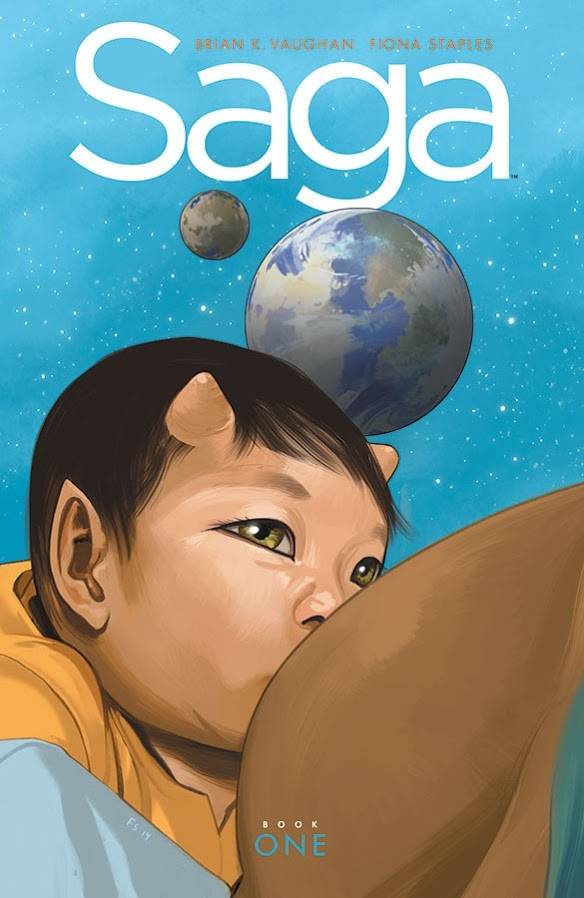 #
SEP140591
(W) Brian K. Vaughan (A/CA) Fiona Staples
At long last, a deluxe hardcover of the Eisner and Hugo Award-winning SAGA is finally here! Collecting the first 18 issues of the smash-hit series, this massive edition features a striking new cover, as well as special extras, including never-before-seen sketches, script pages, and a roundtable discussion with the creators about how SAGA is really made. Altogether, this hardcover contains over 500 pages for less than fifty bucks! Written by Eisner Award-winning "Best Writer" BRIAN K. VAUGHAN (Y: The Last Man, The Private Eye) and drawn by Harvey Award-winning "Best Artist" Fiona Staples (Mystery Society, North 40), SAGA is the story of Hazel, a child born to star-crossed parents from opposite sides of a never-ending galactic war. Now, Hazel's fugitive family must risk everything to find a peaceful future in a harsh universe that values destruction over creation. Fantasy and science fiction are wed like never before in a sexy, subversive drama for adults that Entertainment Weekly called, "The kind of comic you get when truly talented superstar creators are given the freedom to produce their dream book." Collects SAGA #1-18.
In Shops: Nov 19, 2014
SRP: $49.99
View All Items In This Series
ORDER SUBSCRIBE WISH LIST