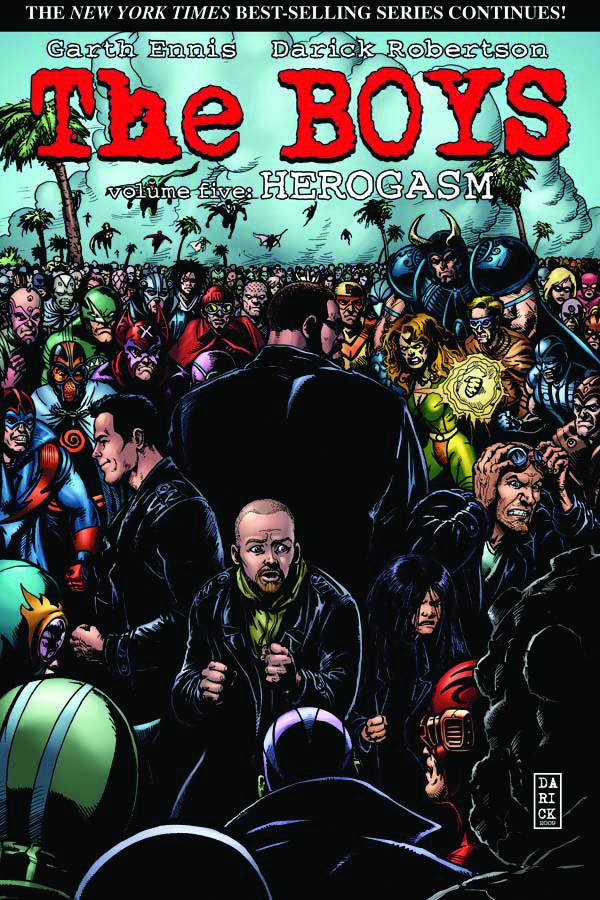 #
SEP090750
(W) Garth Ennis (A) Keith Burns, John McCrea, John McRea (CA) Tony Avi?a, Darick Robertson
Garth Ennis, John McCrea, and Darick Robertson bring another tale from The Boys with The Boys, Vol. 5: Herogasm! An evil so profound it threatens all mankind! The mightiest heroes on the planet uniting to defend us all! A secret crisis of such utter finality that a countdown to civil or infinite war seems unavoidable! But have you ever wondered what really happens during Crossovers? The Seven, Payback, Teenage Kix, Fantastico, and every other superhero on Earth team up for an annual event like no other - and where the superheroes go, can a certain "five complications and a dog" be far behind? But as the fun and games begin, it seems our heroes have set their sights on bigger game than usual. Secrets and blood are spilled in equal quantities, as the Vought-American corporation prepares to make their move - and the truth behind a great American tragedy is finally revealed. For those left standing - and unscarred- the world of The Boys will never be the same again. The Boys, Vol. 5: Herogasm collects all six issues of the first-ever The Boys spin-off mini-series, Herogasm, by Garth Ennis and Hitman artist John McCrea, and features all of the covers by The Boys artist and co-creator Darick Robertson!
In Shops: Nov 25, 2009
SRP: $19.99
View All Items In This Series