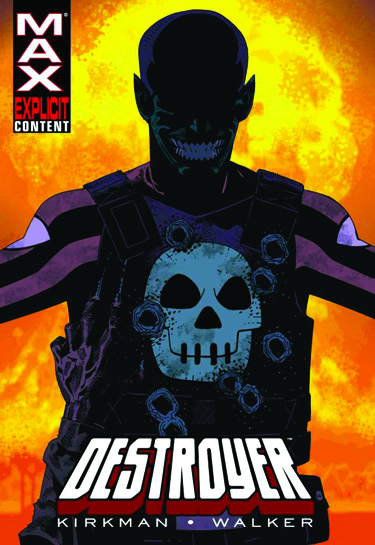 SEP090512
(W) Robert Kirkman (A) Cory Walker (CA) Jason Pearson
Written by ROBERT KIRKMAN
Penciled by CORY WALKER
Cover by JASON PEARSON
For sixty years, Keen Marlowe has been a super hero, taking down bad guys, fighting the good fight.  But it's is about to come crashing to an end.  See, Marlowe is dying -- maybe today, maybe tomorrow, the only question is when.  But Marlowe isn't about to go quietly into the night.  Before he goes, he intends to leave the world a safer place for his family.  And if that means hunting down -- and murdering -- every super-villain he can, so be it.  They don't call him "Destroyer" for nothing. Collecting THE DESTROYER #1-5.
120 PGS./Explicit Content ...$24.99