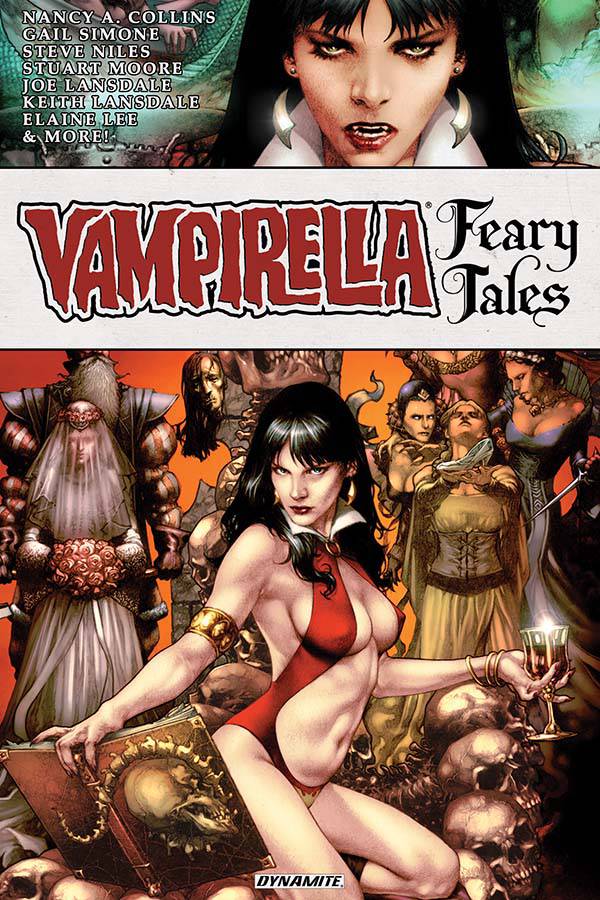 #
MAY151272
(W) Nancy A. Collins, Gail Simone, Devin Grayson, John Shirley, Stephen R. Bissette (A) Jack Jadson, Ronilson Freire, Elmo Eklabuz, Bilquis Evely, Eman Casallos (CA) Jay Anacleto
Nancy A. Collins (Swamp Thing, Sunglasses After Dark) has called upon some of today's finest creative talents - including Gail Simone, Steve Niles, Joe R. Lansdale, Devin Grayson, Stephen R. Bissette, and many more - to celebrate Vampirella's 45th Anniversary by crafting an anthology of twisted tales, bizarre bedtime stories, and fearsome fables in the tradition of the original Warren magazines, each featuring everyone's favorite sexy, kick-ass vampire-turned-monster hunter.
While exploring the Transylvanian castle she's recently inherited, Vampirella dis(CA)s a strange old book of "Feary Tales" that seems oddly familiar. Upon opening it, she is sucked inside its pages and lands in a weird alternate reality, where she is compelled by a disembodied voice calling itself 'The Storyteller' to live out each of the 'feary tales' if she ever hopes to return to reality.
In Shops: Aug 19, 2015
SRP: $19.99