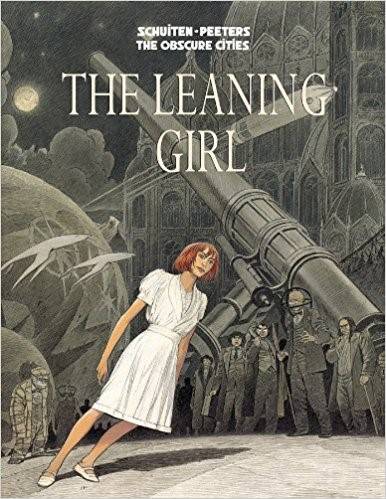 #
MAR170628
(W) Benoit Peeters (A/CA) Francois Schuiten
After a freak accident on the Star Express roller coaster, 13 year-old Mary Von Rathen begins to lean. Doctors can not help her, so she is sent by her selfish mother and hen-pecked father to a private school in Sodrovni. Mary escapes and joins the Robertson Circus where she remains for several years, until she hears from newspaper editor, Stanislas Sainclair, that a scientist, Axel Wappendorf, might be able to help her. Wappendorf is working on a rocket to reach a planet that could hold the secret to Mary's trouble. Meanwhile an artist, Augustin Desombres, has run away from the busy world and buys an empty building on the High Plains of Aubrac in the French countryside. He begins painting murals of strange globes. Now as a young woman, Mary decides to join Wappendorf in the rocket. On the alien planet, they discover an area with many globes where she has a chance meeting with the artist.

Winner of the coveted Gaiman Award as the No. 1 translated foreign comic book series published in Japan in 2013, this story of perseverance and a young girl s search for love has been translated from it's original French into ten languages. Author and publisher Stephen D. Smith has now translated The Leaning Girl into English. It features an introduction by Karen Green, Graphic Novel Librarian at Columbia University.
In Shops: Jun 21, 2017
SRP: $29.99
ORDER WISH LIST