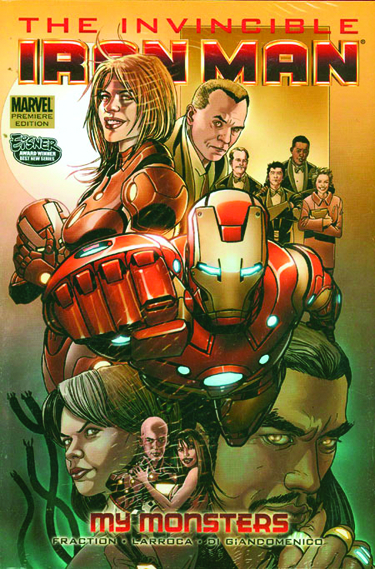 MAR110782
(W) Matt Fraction (A) Various (CA) Salvador Larroca
Written by MATT FRACTION
Penciled by SALVADOR LARROCA, KANO, NATHAN,
CARMINE DI GIANDOMENICO & HOWARD CHAYKIN
Cover by SALVADOR LARROCA
Witness the life and times of Ol' Shell-head - past, present and  future...and as seen through the eyes of his greatest foe! The Mandarin is a collection of lies, stories, myths and legends. But two things are true: He wears, upon each finger, an alien weapon of unimaginable power - and he's going to kill Tony Stark! To defeat true evil, the Armored Avenger will have to soar to never before seen heights, and he's not going alone. Three generations of Starks face their ultimate foe, seventy-some years in the future - while in the present, Spider-Man joins Iron Man as he tries to fill in the blanks of his missing memory. The future starts now for the Marvel Universe's favorite futurist. Collecting IRON MAN ANNUAL #1 and INVINCIBLE IRON MAN #500.1 and #500, plus the story of Howard and Maria Stark's first meeting from INVINCIBLE IRON MAN #503!
168 PGS./Rated A