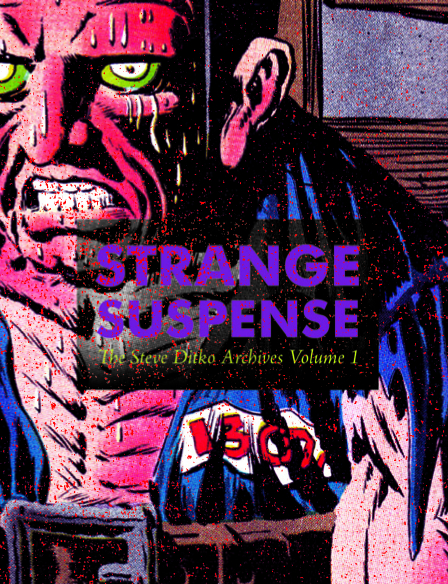 OVER 200 PAGES OF VINTAGE, PRE-SPIDER-MAN, PRECOMICS CODE HORROR COMICS FROM STEVE DITKO
Before the Amazing Spider-Man, before the mysterious Dr. Strange, before the black-and-white world of the Ayn Rand-inspired Mr. A, the legendary comic book artist Steve Ditko was conjuring all manners of horrors at his
drawing table. In his first two years in the industry (1953 and 1954), Ditko
drew tales of macabre suspense that were not yet hobbled by the imminent
Comics Code Authority (adopted in Oct. 1954). These stories featured graphic
bloodshed, dismemberment and blood-curdling acid baths as the ugly end to the lives of the dark and twisted inhabitants of Steve Ditko's imagination.
Following up on strange and stranger: The World of steve ditko, Blake Bell's 2008 best-selling critical retrospective of Ditko's career, strange suspense: The steve ditko Archives Vol. 1 will, for the first time, feature spectacular full-color reprints of every story from those first two years of his career. Beginning with Ditko's very first story to Ditko's short stint
in the Joe Simon/Jack Kirby studio, to Ditko's eventual encampment at the Charlton Comics operation in 1954, readers
will see the initial works of an artist already at a level of craftsmanship that exceeded most of his peers.
The book will also feature editor Bell's insightful historical notes, as well as a series of short essays by some of the comic book industry giants - Daniel Clowes, Gilbert Hernandez, etc. - who will speak to Ditko's influence and his unique craft.