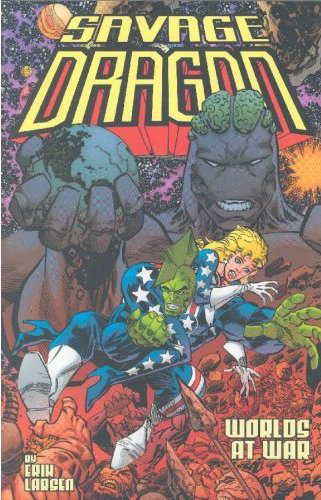 JUL031223
(W) Erik Larsen (A/CA) Erik Larsen
THE CONCEPT: The next step in the Dragon's life! After starting out as a cop on the Chicago police force, the Dragon now heads up a team called Special Operations Strikeforce and works for the United States Government!
THIS VOLUME: This book collects Savage Dragon #41-46, the first six issues of this bold new direction! Erik Larsen pays homage to the work of the legendary Jack Kirby as he reinvents the book once more! The deadly Darklord threatens to wipe out the planet Earth by swapping his doomed planet for ours and only the Dragon and the newly formed Special Operations Strikeforce can hope to save our imperiled planet! The destruction of a planet hangs in the balance! Plus, the Dragon and Jennifer Murphy travel to Godworld and witness the deadliest battle of all as the legendary God of Thunder, Thor takes on Hercules--and the winner gets Earth! All this and a guest star studded wedding of Barbaric and Ricochet, which included Hellboy, Zot, Bone, Vampirella, Shadowhawk, Flaming Carrot, Cerebus, the DNAgents and a host of others! This critically acclaimed series is collected here for the first time. A guaranteed high-octane blast!
In Shops: Feb 18, 2004
SRP: $16.95
View All Items In This Series