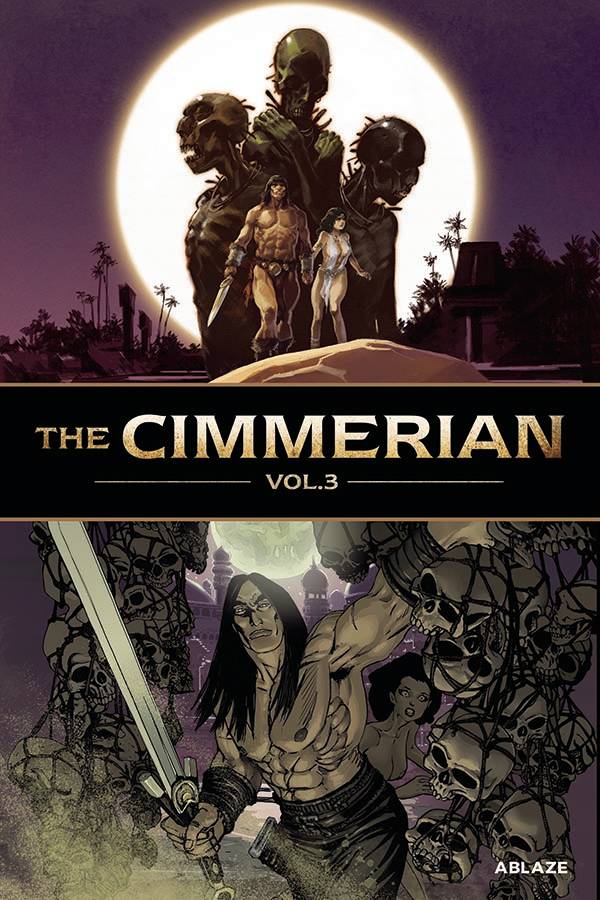 #
FEB231028
(W) Robert E. Howard, Virginie Augustin, Gess (A/CA) Virginie Augustin, Gess
Robert E. Howard's Conan is brought to life UNCENSORED! Discover the true Conan, unrestrained, violent, and sexual.  Read the story as he intended!
Ablaze returns with two more thrilling adventures of Robert E. Howard's famous Cimmerian! Discover the true Conan, unrestrained, violent, and sexual. Read the story as he intended! The Cimmerian Vol 3 includes two complete stories, Iron Shadows in the Moon and The Man-Eaters of Zamboula!
In Iron Shadows in the Moon, a young woman in danger is pursued by her vile master. Conan, whose family has just been wiped out by this same master, puts an end to the beauty's pursuer, and saves her with a blow of his sword. Bound by fate, the couple decide to hit the road together. Their journey takes them to an island where they discover strange ruins inhabited by dark magic. Their paradise-like refuge soon turns into a suffocating nightmare where shadows lurk. Who knows the extent of the dangers that lie there? They will quickly learn that on an island, the biggest threat does not always come from the outside... Iron Shadows in the Moon reveals the genius of its author in describing universes as singular as they are mysterious. With her line, both delicate and powerful, Virginie Augustin illustrates this oppressive and mystical atmosphere, and gives the story a new graphic breath.
In The Man-Eaters of Zamboula, the Cimmerian finds himself in the land of a thousand and one nights! A crossroads of beliefs, languages and cultures, the mythical trading city of Zamboula is also the scene of many dark legends. Upon paying the city a visit, Conan is warned of the dangers of Aram Baksh's home. It is said that most of the foreigners who stay there disappear under obscure circumstances...and it is precisely there that the Cimmerian is spending the night. But by lifting the veil on these mysterious cases of kidnappings, the Cimmerian will discover another secret, even more terrible, linked to the whole of the city of Zamboula... A story imbued with orientalism and macabre witchcraft, The Man-Eaters of Zamboula offers writer/artist Gess the opportunity to deliver his vision of Robert E. Howard's hero in a comic book story of exotic and dark beauty.