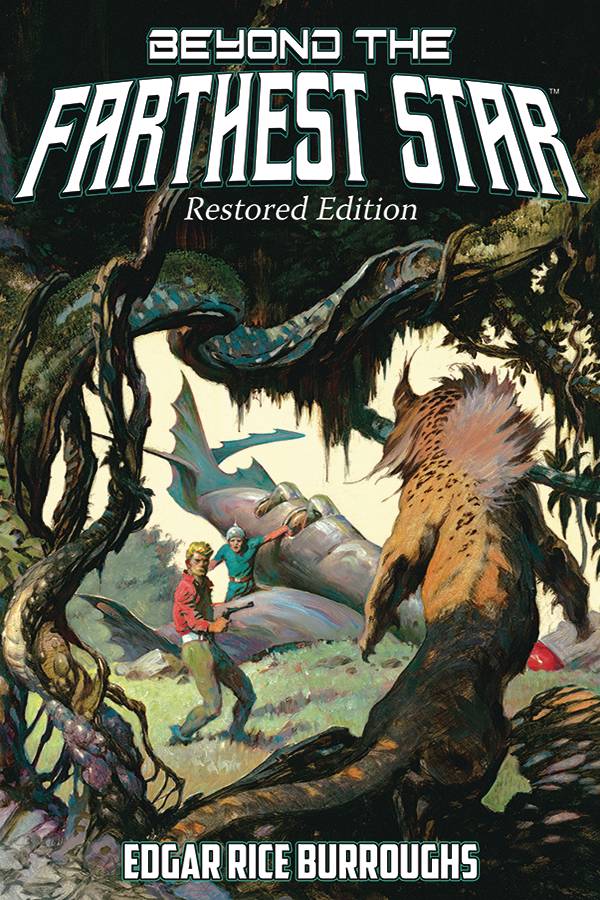 #
DEC221310
(W) Edgar Rice Burroughs (A) Mark Schultz, Roy G. Krenkel (CA) Frank Frazetta
When Nazi warplanes blast an American fighter pilot out of the sky, he awakens not in the expected afterlife but on a far-flung planet-one of eleven interconnected worlds hurtling around a strangely constructed star system. On Poloda, he earns a new name-Tangor, one who came from nothing-and a new home among the brave people of Unis, a nation locked in perpetual war against the brutish, totalitarian Kapars. But when news comes of a powerful invention that could turn the tides of the conflict, Tangor must undertake a daring undercover mission behind enemy lines. There, in vile Kapara, he will not only risk life and limb, but also brand himself as a traitor in the eyes of his newfound friends, as he continues his fight for freedom beyond the farthest star!
What has been unknown to readers is that the 1941 Blue Book magazine publication comprising Part I of Beyond the Farthest Star was heavily edited, with a substantial number of line edits on almost every page and several lengthy and meaningful passages-some more than a page long-excised throughout. That altered and abridged text was used as the basis for all book editions of the novel-until now. We are pleased to announce that we have gone back to Edgar Rice Burroughs' original typescript restoring the author's preferred text of the novel. Beyond the Farthest Star: Restored Edition features a newly commissioned frontispiece by renowned artist Mark Schultz; classic interior illustrations by Roy G. Krenkel; an introduction by noted science fiction author Paul Di Filippo; a preface by ERB, Inc. Director of Publishing Christopher Paul Carey discussing the restorations to the text; maps of the planet Poloda and the Omos star system; a diagram of the Unisan alphabet and numbers; and an extensive section of rare and previously unpublished bonus materials mined from the archives of Edgar Rice Burroughs, Inc
In Shops: Mar 22, 2023
SRP: $34.95
ORDER WISH LIST