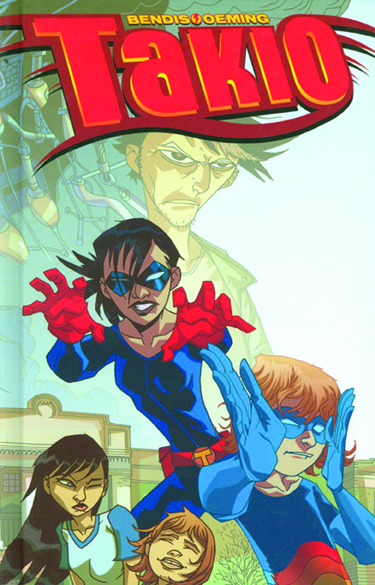 DEC100634
(W) Brian Michael Bendis (A/CA) Michael Avon Oeming
Written by BRIAN MICHAEL BENDIS
Penciled by MICHAEL AVON OEMING
Cover by MICHAEL AVON OEMING
Created by Brian Michael Bendis, Michael Avon Oeming and Olivia Bendis. Takio is the first all ages graphic novel series from Marvel's Icon imprint and the first new creator owned book by Brian Michael Bendis and Michael Avon Oeming since their award-winning, long-running Powers.  Takio tells the story of two sisters in a multiracial, adoptive family who are driving each other insane!!! Their overprotective mother makes them walk to school together, eat lunch together, and play together. They can't get away from each other!! But when a one-of-a-kind, once-in-a-lifetime accident gives them real-life superpowers, these two sisters become the first actual superheroes in the entire world. And it is awesome!! Now the sisters have to learn to get along so they can save the world and get home by six... or they are so grounded. This fast-talking, whip smart new graphic novel series will thrill fans of Bendis' Ultimate Spider-man!
96 PGS./All Ages