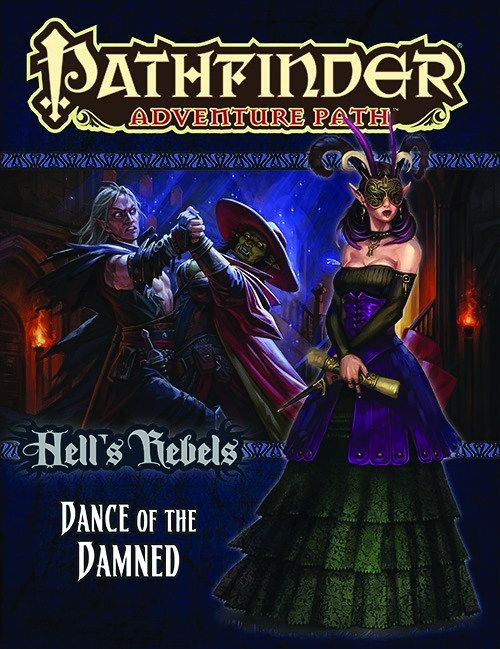 AUG152914
With a hideout in the city of Kintargo established, the heroes of the growing rebellion are poised to take back the city. But before their group, the "Silver Ravens", can strike against the diabolic House Thrune, a few final preparatory steps must be completed. Forging alliances with nearby tribes of aquatic elves and the free-city of Vyre, and closing the mountain pass known as "Menador Gap" will cut off Cheliax's easy sea and land routes, forcing Inquisitor Barzillai Thrune to rely on his resources at hand to defend his control of Kintargo. Yet nothing is as simple as it could be, and the dangers awaiting the heroes of the revolution in the nearby seas, mountains, and the sin-wracked city of Vyre are not always those you can defeat with a spell or sword. "Dance of the Damned" is a Pathfinder RPG adventure for 7th-level characters, and features several new monsters, a gazetteer of the dangerous city of Vyre, an exploration of the devilish demigoddess Mahathallah, and a brand new Pathfinder Journal chapter.
In Shops: Oct 28, 2015
SRP: $24.99