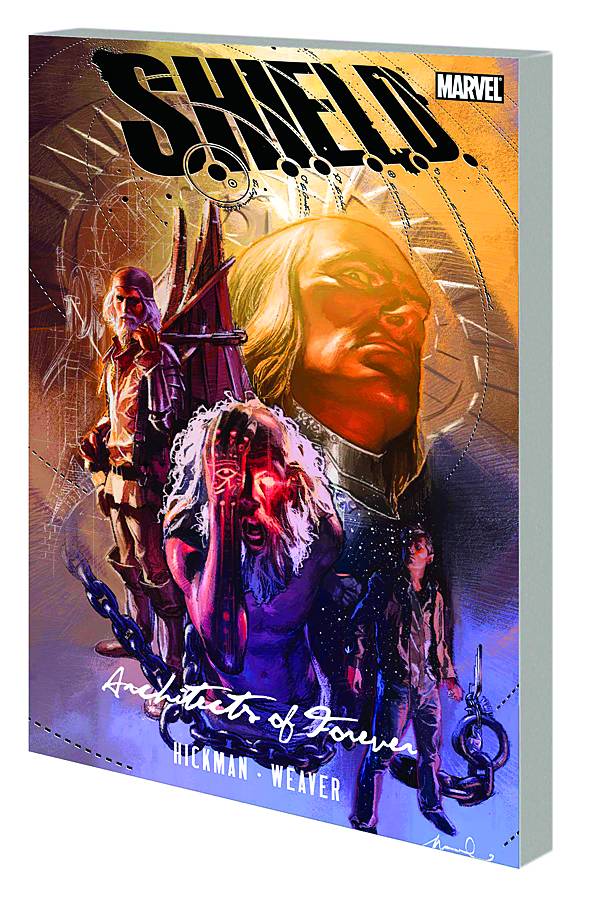 AUG110727
(W) Jonathan Hickman (A) Dustin Weaver (CA) Gerald Parel
Written by JONATHAN HICKMAN
Penciled by DUSTIN WEAVER
Cover by GERALD PAREL
Leonardo da Vinci. Galileo Galilei. Sir Isaac Newton. The titans of history, they discovered the truth of reality in mathematics and the limits of possibility in science - and pushed past those limits with their boundless imaginations. And each has weighed the same question: What is man's destiny? For these men were also all members of the Brotherhood of the Shield, a secret organization that has been safeguarding humanity and shepherding the future for almost 5,000 years. They turned back the Brood in ancient Egypt. They kept a Celestial from destroying Earth in first-century China. They stopped Galactus the first time he visited our planet during the 16th century. And still they watch over us all. But during the late 1950s, the Brotherhood faced a test like none other: the Night Machine, a super-powered being driven to bring about the organization's utter destruction.?His vicious attack on the High Council's Rome headquarters causes a line to be drawn between the members of the Shield, and the questions about man's destiny will be resolved once and for all! Collecting S.H.I.E.L.D. (2010) #1-6 and material from S.H.I.E.L.D. #1 DIRECTOR'S CUT.
192 PGS./Rated T+