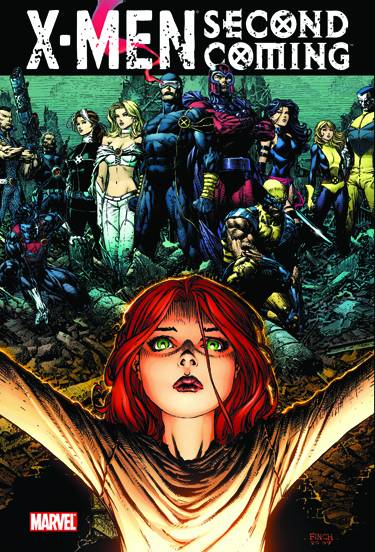 #
APR110694
(W) Various (A) Various (CA) David Finch
Written by SEAN MCKEEVER
Written by MIKE CAREY, CRAIG KYLE, CHRIS YOST, MATT FRACTION & ZEB WELLS
Penciled by STUART IMMONEN, DAVID FINCH, TERRY DODSON, IBRAIM ROBERSON, LAN MEDINA, NATHAN FOX, GREG LAND & MIKE CHOI
Cover by DAVID FINCH
It's always been a bad time to be a mutant. This may be the worst. The mutant population had dwindled to a mere 181, hardly enough to sustain the race. For more than a year, no new mutants manifested - until the mutant baby girl Hope came along. Under the watchful eye of the mutant soldier Cable, she was sent into the future for safekeeping. Now, Cable and Hope have returned. Many view Hope as the Mutant Messiah, who will lead the race into a peaceful and prosperous future. However, the Human League is bent on eradicating the last mutants on Earth so mankind can evolve. Led by Bastion, a highly evolved mutant-hunting Sentinel robot, the Human League sees the death of Hope as the final nail in the mutants' coffin. The future of an entire race rests on Hope's shoulders. Will this be the end of mutantkind? Or its Second Coming? Collecting SECOND COMING #1-2, UNCANNY X-MEN #523-525, NEW MUTANTS #12-14, X-MEN LEGACY #235-237, X-FORCE #26-28 and material from SECOND COMING: PREPARE.
264 PGS./Rated T+