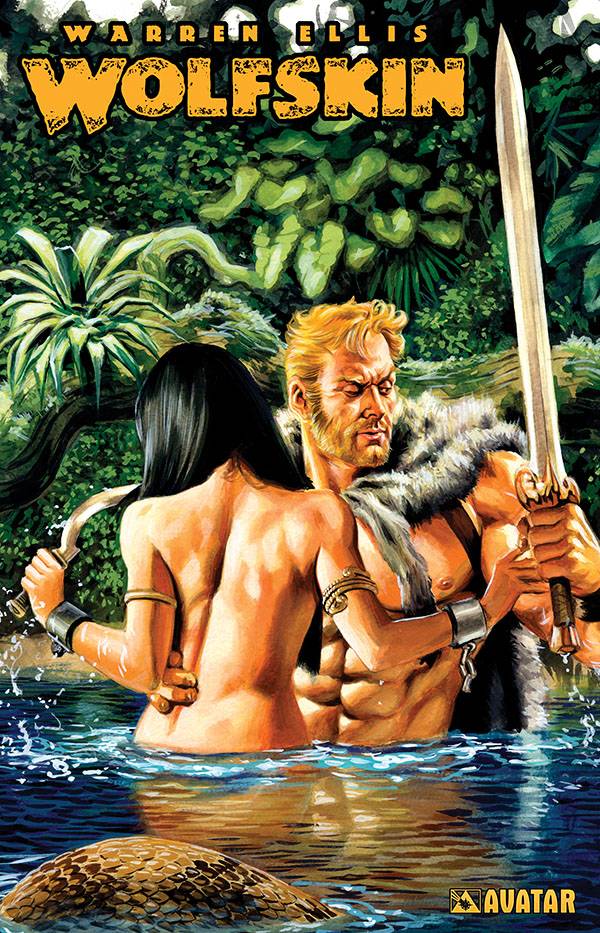 #
APR090699
(W) Warren Ellis, Mike Wolfer (A) Gianluca Pagliarani, Juan Jose Ryp (CA) Felipe Massafera
Before history was recorded in stone and ink, some men wrote it in blood! Warren Ellis' barbarian epic is finally collected, just in time for the new series coming late 2009! From the time before history began, in the time when the continents were still connected by land, from the harsh climes at the top of the world, a Northish soldier wrapped in a cape of wolfpelts walks south, into the forests of the High Midlands that are now Europe, to find a village cut in two by travelers from the East. Soon, he too is torn - between duty to the lives he has ruined just by finding them, and duty to the hideous murder-god of the Northish wastes and the berserker drugs that are his sacrament... Warren Ellis cuts loose to unleash his take on the genre fans demanded he assault with full color art from Juan Jose Ryp and Gianluca Pagliarani! Wolfskin fuses heroic fantasy in the mode of Conan, the Viking sagas, and samurai fiction into a single story of weird history and apocalyptic violence.  This first volume collects the original 3-issue series with art by Ryp, Annual #1 with art by Pagliarani, and a huge cover gallery all wrapped in a stunning new painted cover by Felipe Massafera! This killer collection is also available as a Hardcover edition with an all-new cover by Massafera that is limited to just 1,500 copies.
In Shops: Sep 30, 2009
SRP: $27.99
View All Items In This Series
ORDER WISH LIST