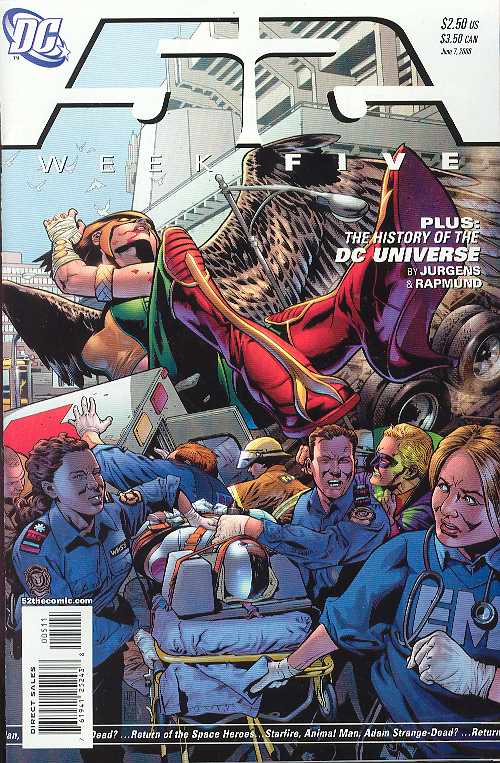 APR060201
(W) Geoff Johns, Dan Jurgens, Grant Morrison, Greg Rucka, Mark Waid (A) Chris Batista, Keith Giffen, Dan Jurgens (CA) J. G. Jones
Written by Geoff Johns, Grant Morrison, Greg Rucka, Mark Waid
Breakdowns by Keith Giffen
Art by various
Backup feature by Dan Jurgens & Art Thibert
Covers by J.G. Jones
The series filling in the gaps of the DCU's lost year continues!
In WEEK 5, illustrated by Chris Batista & Jimmy Palmiotti, It's a mystery in space and a surprise so unexpected that even the cover is top secret!
WEEK 6, with art by Joe Bennett & Ruy Jose, features the debut of some major players, as Green Lantern discovers the world's newest sensations: China's own super-hero team!
Booster Gold sells out in WEEK 7, illustrated by Ken Lashley & KWL Designs! But he's sure to see the same people on the way down that he met on the way up!
And WEEK 8, with art by Eddy Barrows & Rob Stull, puts the spotlight on John Henry Irons...Man of Steel! With Superman gone, can he stop the never-ending schemes of Lex Luthor?
Plus, "The History of the DC Universe," backup feature continues each week by Dan Jurgens and Art Thibert!
52: A year without Superman; a year without Batman; a year without Wonder Woman...but not a year without heroes.